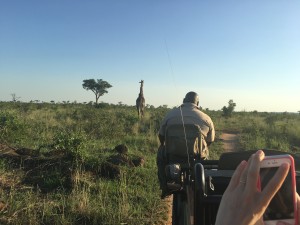 Tracker Louis upfront, we headed for the giraffe

As a little’un, the gal used to leave the icing on her slice of cake to last. That was perfection, with nothing more to come. In the case of luxury hotels, there are many, in numerous countries, that represent the equivalent of that icing. But now, when it comes to the safari scene, one name stands supreme, Singita. A stay at Ebony Lodge, one of two 12-unit lodges, almost side by side between the Sabi and Sand rivers in north-eastern South Africa, exemplifies perfection. First, look at the animal side. Soon after starting out for the daily sunset drive, guide Sipho and his tracker Louis (sitting on a jump seat off the front of the eight-seat Land Rover) spotted giraffe, and we were off. See the result, above. 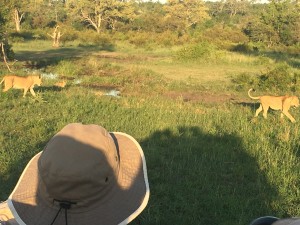 There they were, a family of lion

Next we headed for lion. There are at least three prides in this part of the total-38,000 acre Sabi Sand Reserve, and the guides knew where to find them. Louis got off his jump seat, as is the rule when lion searching (he sat in the seat next to me). Sipho took us off road, or rather track, bouncing us over rocks and boulders (ever felt you were in a washing machine?). There they were, a family, including some absolutely charming little cubs – see the video, below, and watch it right to the end. Of course there were water-buffalo, and a selection of antelope, and lots of birds but no time, this drive, to look at any more. Stay at Singita Sabi Sand resorts, and everything, including two drives a day, pre-sunrise and sunset, is included, which means laundry, and eat and drink when and what you want. 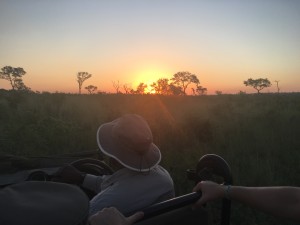 As the sun set…

By the time the sun was setting the animals had the upper hand, but there seemed to be none around and we, a honeymoon financial couple from New York and a safari specialist and a teacher from England, all climbed over-and-out of our Land Rover. The guys set up a full bar on a pull-out rack at its rear, with linen table cloth, sparkling and red and white wines, and miniatures of spirits – sadly not enough Gins, as it turned out, because nothing but nothing tastes better than an ice cold gin and tonic, with fresh cut lime, when you are standing in the middle of the bush with a 360-degree panorama that says This Is The Real Africa. 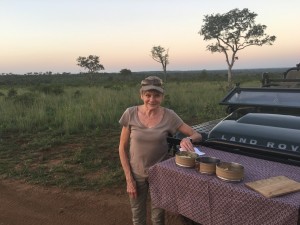 .. it was sundowner gin and tonic time

We climbed back up into the Land Rover, Louis now back in his jump seat and shining a very bright torch around (Sipho, like all guides, does carry a rifle, which he has never yet used, and if he had to he might not be able to get to it in a hurry as it is in a beautiful khaki case, labelled Singita, like the Land Rover). Back home in villa ten, there was just time for a shower, a really hot shower, and a skype, a really clear skype – yes, there is excellent WiFi not only in each villa but throughout the resort – and then it was time for dinner. And now perhaps I should explain exactly why Ebony Lodge is such an outstanding ‘luxury hotel in the bush‘….