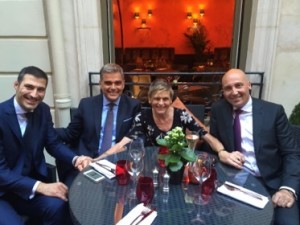 After walking past Paris-under-wraps, it was such a relief, says the gal, to get to a luxury hotel that is not only open but bustling-full of beautiful people, all having a good time. Buddha-Bar Hotel Paris is now two years old, and it has matured with oodles of colourful character. In summer, main activity is outside in the courtyard. Lots of black Dedon furniture, black or sienna cushions, and music from the Buddha-Bar collection all set the scene. Overhead, strung from one side of the courtyard to the other, floated lots of big transparent balloons. Omer Acar, representative of the hotel’s owner, Katara, dined with the hotel’s GM Gerald Van Reck, and Sylvain Greiner, who looks after the food and drink. On a Thursday this place would be even busier, as that is Sunset Party Night, with live music. 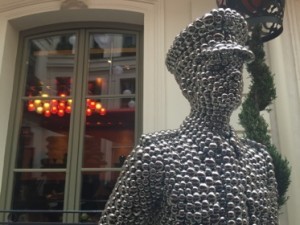 The General, by Valay Shende

Gerald Van Reck has a good working partnership with Opera Gallery, nearby. The Gallery changes artworks-on-loan every two months. Right now one of the display pieces, in the hotel courtyard, is this General, made of stainless buttons. It is by Mumbai-based sculptor Valay Shende, who always stays here whenever he is in Paris. Valay Shende, by the way, is the creator of the dubbawallah, sculpted man with a bike, outside one of Oberoi Delhi Gurgaon‘s restaurants. Other temporary sculptures here at Buddha-Bar Hotel include a seven-foot standing yellow cracker, by French pop sculptor Laurence Jenkell, and an enigmatic flat portrait of Sophia Loren. 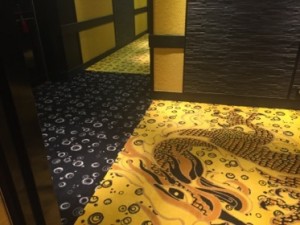 Go anywhere inside the 56-room hotel and, thanks to designer François Wapler, it is a riot of colour. Enter from rue d’Anjou and you go through an arch from which hang 75, double-height, red Chinese lanterns. Look at the carpets on upper corridors, where some walls are bright buttercup yellow. Suite 202 pairs classic French, namely high-high ceilings and moulded walls, with Asian eclecticism. Smooth wood floors are complemented by a big rug under the bed – it is scarlet, with a black Chinese motif echoing back-lit fretwork that forms the headboard. 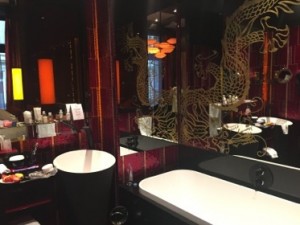 Look at the bathroom, with dragons, and black Grohe taps and more. I got up early, for a hike around the area, including back to Place Vendôme, and a quick workout in the 24/7 gym. Then it was time for breakfast, in Vraymonde (named for Buddha-Bar’s late founder Raymond Visan). Whereas dinner, in the courtyard, had been sashimi followed by tempura, now, inside in a room formed from five adjacent stables, now with shared walls cut into arches, was just the finest of France, including a Bordier yoghurt that must surely be among the finest in the world.