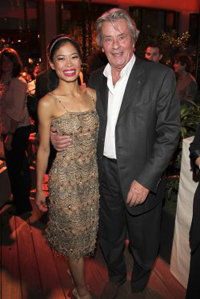 Acrobats took over the inner courtyard of the new Mandarin Oriental Paris Thursday this week – and no, this gal is neither one of the ‘human tower’ nor was she there (she was dining elsewhere in this wonderful world).  But I dined in the luxury hotel’s  premier restaurant last night (Saturday), and just had to use the place mat as a halo.

Sur Mesure de Thierry Marx is not my ‘usual’ type of restaurant. First, it is like an all-white space ship, lined in white fabric that deliberately flaps off the walls. There is no colour, at all. The tables have white cloths, white china, a pale yellow light comes out of a pierced white china candleholder.

Minimalism has nothing on this.  Secondly it is not my usual kind of food. There is no choice. Thierry Marx’s menu of the day comes rolled, as a single sheet.  You can choose six courses, or nine courses.  We went for six, and made our way from glass dim-sum boxes holding confections of red pepper through, 2.5 hours later, to a china dim-sum tower holding confections of dessert. 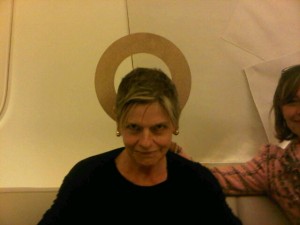 In between I did manage to divert from a display of languoustine carpaccio to a salad, which meant I did get some green in my meal, which my friends did not.

And afterwards we came out into the central courtyard, about the size of a tennis court. It is wooden decking with sprouts of big trees and greenery, and semi-hidden in all the alcoves are tables of Parisians, talking, drinking. A four-metre high white ‘birdcage’, open one side, holds one such discreet table: overhead hang half a dozen pumpkin-sized fuchsia-and-white floodlights. 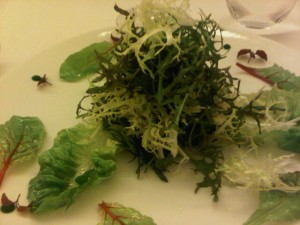 There was orange at breakfast just now, in the form of Jules & Jim, the goldfish who live on the buffet table of the second restaurant,  Camélia (this one does have windows, looking into the courtyard, and it is pale beige).

Here, Mr Marx, whom I gather is a martial arts specialist, provides a really healthy wakeup, great just-squeezed juice and bread that smacks of Poilâne, healthy enough for F1 drivers.

White, by the way, is also the order of the day at the sensational fitness complex here.  You climb up a spiral staircase, white, its walls encrusted with three-dimensional white plastic flowers. 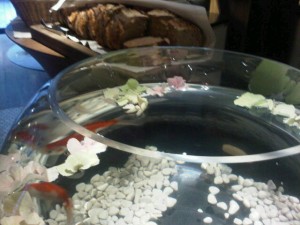 As I worked away on the very latest equipment (by Antonio Citterio for Technogym) I could look down into the pool, where yesterday I had done my laps… up and down, 25 metres one way, the same back.

The all-white long side walls show continuous videos of tiny flickering butterflies, mostly soft grey but suddenly a pale pink butterfly emerges, flips over and disappears. There is a full-height Murano-tile water wall at the far end of the pool, with a steam room behind it. 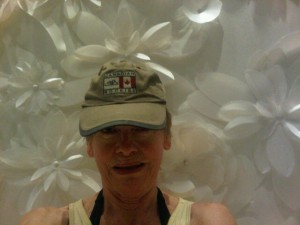 Coming back from the gym, in front of designer Sybille de Margerie's 3-d white plastic wall

My corner suite, 419 (number on the floor, outside in the corridor, next to a burst of pink butterflies in the otherwise-grey carpet) is, by contrast, sandalwood and a variety of golds, colour-wise. If a girl had time she would laze in the tub, watching television at its foot, or lie in bed watching the outrageously-large Bang & Olufsen.

I loved the drapes, full-length shades of golden raw silk. Twisted cords are threaded through the inner side of each pair of curtains: pull them together, twist the said cords and they hold tight, blocking out all light, clever and mediaeval. Well done, GM Philippe Leboeuf.

And a nice touch of history in what could arguably already be the world’s most beautiful 21st century hotel (is it true that a top Russian magazine has said this is the best hotel anywhere, and this is only three days after that opening party?).