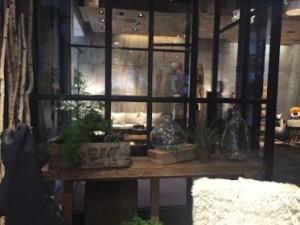 One corner of the lobby

Is it a shop or is it a gallery? Is it a potting shed, or a garden, or even a hotel? These are questions that come up the whole time from people passing west or east along New York‘s West 58th Street, or north or south along Avenue of the Americas (Sixth Avenue), at right angles to it. Hans Schaepman, the Dutchman who runs what is in fact Manhattan‘s most unusual new luxury hotel, 1 Hotel Central Park, says people going past are often asking. As the gal says, plants outside on the sidewalk lead you in, so to speak, to a lobby that has more plants, on the floor or hanging from the single-level ceiling, alongside deliberately-broken white flower tubs. Add decorative bits of driftwood and cork, and a couple of sheepskins, and brick walls, and an aroma that wafts throughout the lobby, and outside, and smiling staff in muted and perhaps shapeless grey dresses, and you get the picture. 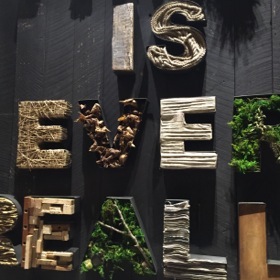 Thanks to designers AvroKO there are touchpoints wherever you look in this 229-room hotel (built as a hotel, then for many years an office block until Barry Sternlicht came along and bought it). By the elevators on the ground floor, the homily ‘No thing is ever really lost’ is spelled out in living plants, bits of wood, stone and so on. Exit an elevator at your floor and there are, illuminated, living plants set vertically by your door. You know it is your room, by the way, as its number is burned into the floor. Inside, you have a desk-table of recycled wood, its provenance burned into it (and there is an odd selection of rail sleepers set into the ceiling). More living plants are set on a window sill. A wood egg-timer is on one wall of the shower, reminding you how long you have been running expensive hot water. 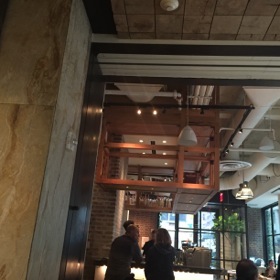 And yet, and yet, it all works. The free wifi is amazingly fast, there is flattering light in the bathroom, the hemp-filled Keetsa bed produced a really good night’s sleep, and I learned a lot about the hotel’s eco-friendliness from the big, wall-set LG television. Bedroom windows open, what a plus. The gym has an admirable array of ICON’s FreeMotion equipment (as at Montage Deer Valley, in Utah). The hotel partners with Jonathan Waxman, who has turned the sizeable ground floor corner spot into a Jams restaurant, highly popular with locals who do not realise this is a ‘hotel’ restaurant – and since room service, which is also Jams, is decidedly limited I think most single guests, of either sex, would probably feel perfectly at home in Jams. 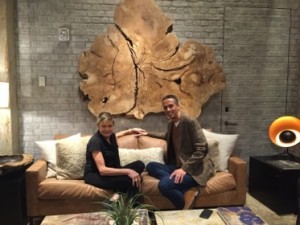 Hans Schaepman, who threw away his Ritz-Carlton, and later Langham, business suits, and invested in blue jeans when coming here, is in his element. Every day I am energised by this new-luxury hotel, he says. Opened only in August 2015, it has already built up a strong following not only in the USA but in Brazil, and France, Germany and UK. The age range is much wider than he anticipated: there were many 40-ish CEO-types staying when I was there – it was they, all males, who were the only others in the second floor gym at six that morning. Hans Schaepman is also amazed that some guests have become regulars, in only five months (Hans, let me tell you a secret, your concierge Nichole and all those guys helping out in the lobby, and saying goodbye to you and please come back, they are all more than enough to bring a gal back). PS, when I left I was given a small bit of homemade paper impregnated with seeds, and instructions to plant in my garden at home, for a lasting memory of my stay.