In the past, luxury hotels in Great Cities of the World were, akin to theatres, adorned in deep crimson velvet and miles of gold moulding.  Pinnaccle hotels of the 21st century are, with the exception of Dubai’s Emerald Palace Kempinski, not so attired. Today’s more sumptuous luxury hotels are related to Hollywood, or Netflix or Broadway, says the gal. 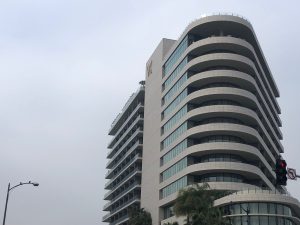 Actually, only a stone’s throw from Hollywood is one of the most glamorous and luxurious of hotels, Waldorf Astoria Beverly Hills.  Even the exterior is a sculpture. And there are sculptures galore both outside, say at the junction of Wilshire and Santa Monica, and inside.  The hotel’s owner, Beny Alagem, personally chose which piece should go which. Pierre-Yves Rochon was in his element designing the interiors – this is the Hollywood of Greta Garbo and Betty Grable.

My room, 902, a 65 sq m space, would have been ideal for any star – see a video, below.  The ground floor, too, is ideal for ballgowns with long, swishing trains – funnily enough, both the lobby-set boutiques are for guys, Bijam, who has now evolved from his yellow-centricity to all vivid colours, and a new store, James Perse, which by contrast offers male gear in shades of black through to white via charcoal and grays. James Perse, by the way, is a local all-round designer who, encouraged by his father’s Maxfield brand, started selling baseball caps.  Now his eponymous brand sells everything lifestyle for men, women and kids as well as the home: he already has scuba and surfing letting estates in Mexico and an events property in Thousand Oaks CA and apparently he would like a James Perse hotel.

Here, at sumptuous Waldorf Astoria Beverly Hills, I  love the greens in the conservatory attached to the main all-day Jean-Georges Beverly Hills restaurant – see the view, above.  I expected Rihanna or her ilk to take the stage at any moment.  I dined with the hotel’s Manager, Antonio Bugarin, an absolutely charming and luxury-nut Mexican (well, trained by his first mentor, Ed Steiner, of course he would be).  His current mentor is Beny Alagem, who used to be a guest at One&Only Palmilla, where he found Bugarin.

Antonio Bugarin someone how managed to give special attention to me, and all other guests of this gorgeous 170-room hotel. There was one national president staying here but it was all done so discreetly you would never have known. You would also never be aware that the rooftop pool and outside restaurant are closed – but they re-open on 2nd April, with a cover-all pull-back awning for the restaurant .  Meanwhile, the theatre goes on, beautifully rehearsed but every day a unique performance. NOW SEE MY ROOM