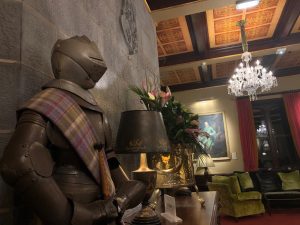 A full-scale suit of armour in the lobby

Ireland’s Dromoland Castle, in Co Clare, is only eight miles from Shannon airport. The gal loves the way it really does fit a preconceived image of what a mediaeval castle might have been like. The intimate lobby of the 98-room luxury hotel, part of Preferred, is guarded by two suits of armour (who wore them, one wonders?) It was in the O’Brien family from its 1543 start until it was sold in 1962, with 330 acres, to Bernard McDonough, and it passed to its present owners, a mostly American consortium, in 1987.  The interior of the sprawling castle is a network of impressive rooms connected by narrow, metre-wide, corridors, going through quite a lot of right angles. And there are stairs, lots of them, not all shallow. Imagine all those O’Briens trying to find each other.

I sat looking at an O’Brien of former days, or at least a portrait of him, during dinner in the Earl of Thurmond Restaurant. This is a truly memorable eating place, with high brocade-covered walls rising to the tall ceiling from which hang absolutely priceless Waterford crystal chandeliers.  Dine here for traditional finesse. Place settings, on the starched white cloths, include fish knives and forks, and soup spoons.  The printed menu lists 27 suppliers, including Gourmet Game from Co. Clare, who were responsible for my venison, sandwiched, course-wise, between a pointillist-style tuna starter and a mascarpone mousse ball wrapped in a raspberry glaze.

Not wanting to have night turn-down, I found, nonetheless, that someone had put on my bedroom door a hotel carry bag holding a note inviting me to call if I wanted service, plus a room service door knob menu, Burren chocolates and a glass bottle of water.  I was in corner room 304, the Keightley Stateroom, and it was really comfortable, in Irish hues of taupe through to brown moss, and standing Celtic sculptures – design is a blend from Dorothy Draper, Carole Roberts and Carleton Varney. A modern four-poster cleverly had a taupe leather panel at its foot which provided vertical protection when putting suitcases on a matching taupe leather footstall. I had an espresso machine, not an Irish commonplace, and an electric towel rail which thankfully is.

Yes, it rains a lot in Ireland and I must admit I was still shivering half an hour after first arriving, but the spa whisked me down for a hot basalt stone massage, which restored my equilibrium.  Obviously the golf courses here are regular therapy for many locals, who do love this place – I had the good luck at dinner to sit near a family party of 12 and it was heartening to see how the pre-teens, all dressed up for their special dinner, were enjoying the experience. This is a luxury hotel that is loved by Irish people, always a good sign.

In the morning, nothing seemed to move until 8 a.m., starting time both for the gym – I had compensated by having a hearty walk – and breakfast.  This was another classic Irish experience, with linen napkins folded as standing fans, and butter shapes in tringles, diagonals of toast, in a silver rack wrapped in tissue.  Glenliven yoghurts came from Alan and Valerie Kingston’s farm in West Cork, and a house omelette is brought with Hegarty’s Cheddar and Limerick ham. Sir Edward O’Brien, probably painted in the mid-18th century, gazed down at me as if to say, look, the sun has come out.