In line outside the Apple Store on Fifth Avenue

What a memorable day for the gal to be in the Big Apple. The new iPad (iPad rather than iPad-3, they have dropped the numbering) goes on sale nationwide.   Outside the fabulous Apple Store at Fifth Avenue and 59th Street, there were people camping out even a couple of days ago.

As they said on NY-1 television this morning, why not simply go to apple.com and order it, for delivery?  This particular Apple Store, by the way, is approached through a clear glass box, emblazoned of course with the Apple logo, and then you go down the familiar glass stairs to the main store.

Like all Apple stores, it is designed by architect Peter Bohlin of Bohlin Cywinski Jackson.  Apparently he is a highly-reserved septuagenarian who was working on a design for a new home for Steve Jobs but, obviously, it was never built.

Although another store, at Grand Central Station, is actually bigger than this one, this Fifth Avenue delight, six years old but looking oh-so-today, seems centre of the universe, or at least New York.

The closest luxury hotel for Apple enthusiasts is The Plaza, just across the – well, plaza.  Actually The Plaza, a Leading hotel managed for its two characterful owners by Fairmont, is ideal for a lot of enthusiasts.  Let us list a few.

Eloise Suite at The Plaza, designed by Betsey Johnson

Eloise lovers call this home. Kay Thompson’s book on the little girl who grew up at The Plaza is a perennial for feminine travelers under eight, and thus their parents and relieved grandparents who know now what to give little Harper Six for her birthday.

An overnight in the Eloise Suite, gorgeous.  Revel in Betsey Johnson’s pink and fluffy design, while your aged minders have to while away a night in a boring-by-comparison suite next door.  You, heavenly Harper Six, come away with an Eloise bathrobe and a whole $100 to spend in the Eloise store in The Plaza’s basement shopping mall.

You can spend it on gear, or on afternoon tea with your little friends, while mom, dad and all the others can nibble at Todd English’s food emporium a few yards away. If you want exercise later, borrow the hotel’s BMW bikes for a spin in Central Park, just across the road.  Many hotels do pet-friendly: few seriously do memorable kids-friendly. 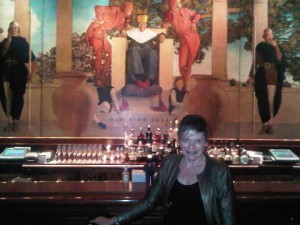 Themed suites are somewhat in the news.  Bloody Mary, car and polo enthusiasts will flock to another nearby beauty, St Regis, opened by John Jacob Astor in 1904 and still going strong – unlike its founder, who tragically drowned on the Titanic. Some kind of commemoration will be held next month, a hundred years on.

Every St Regis must have at least six different Marys on its bar list, the original, invented here by bartender Fernand Petiot in 1934, a hotel-unique (The St Regis Osaka’s Shogun Mary includes wasabi) and four from sibling hotels.

St Regis New York’s bar still has its original King Cole mural, by Maxfield Parish.  It still also has its million-dollar staircase, a French marble affair rising to the 20th floor rooftop from which Alastair Cooke, that famed and oh-so-missed English broadcaster (‘Letter from America’) broadcast the first live jazz back in 1937.

Climb those stairs, or take the elevator if you don’t want to keep fit, to see the hotel’s existing suites, themed for Dior and Tiffany.  Bother, both are taken, today, so no girlahead inside news on them.  But, and this is a scoop, is it true that St Regis New York will be doing a Bentley suite, with lots of beautiful wood and polish. Stay there and surely you will purr with pleasure. You might even be chauffeured around town, say to do a bit of shopping, in the hotel’s signature Bentley…

Another scoop. Here is the first picture of what the ‘ordinary’ rooms will look like.  By January 2013 all the bedrooms will have been brought up to date. As GM Paul Nash says, this is no longer your father’s hotel, it is yours.

The new look, by Michael Stelea of HDC, the designers whose portfolio includes Turnberry in Scotland and Hilton Molino Stucky, Venice, replaces floral flounces cascading down from above the bed by sleek straight back-of-bed curtains with a little half-tester above.

They are adding fibre optic reading lights, bedside sockets for telephone- (or new iPad!) charging – and marble-floored foyers.  The blue colour scheme, one of three, is especially great.

Croque Monsieur in the Astor Court

I had one of the greatest gnocchi ever in the hotel’s Astor Court restaurant, looking through to King Cole.  My two mates had classic-with-a-new-twist, a much-loved, high-calorie croque monsieur sandwich.

I personally was in a Paul sandwich, fortunate enough to be Mr Nash and, also, one of the greatest brand specialists in today’s travel world, Paul James, who is foster-daddy both to St Regis and also Luxury Collection. His job is to put St Regis on the world map.  How does he do it?  Read this, below.

Last weekend he hosted one of St Regis’ coveted polo tournaments in São Paulo. No, there is no St Regis in Brazil, but there are lots of – very rich – Brazilians who either like the brand or should like the brand. St Regis has long worked with Sentebale, the charity headed by Prince Harry and Prince Seeiso of Lesotho.

As girlahead’s growing number of enthusiasts knows, the blue-suede-shoe chameleon who is third in line to the British throne has been working his way, on behalf of his grandmother, The Queen, around the Caribbean and Central America.  He would be taking a few days off, to play polo for Sentebale.

Paul James and his team had less than three months to arrange the event. A committee of St Regis GMs and corporate events and PR people planned and made it all happen. The weekend started with a late-night Friday dinner at a typical restaurant, Brasil a Gosto. On Saturday there was all-day polo preparation, with lunch, at Haras Larissa stud ranch.

That night dinner was at the rooftop Sky Bar, at the boat-shaped Unique Hotel (a Leading hotel). By Sunday, the number of guests, which had started at about 70, swelled to over 350 top-brass Brazil invitees. They watched Prince Harry’s team play against the St Regis team, led by the brand’s ambassador, Nacho Figueras – who also happens to be the ‘face’ of Ralph Lauren Black Label.

But this is not all. The 20 press people who had been flown in from around the world were then transported lock, stock and barrel to Miami, because this very weekend sees the opening of St Regis Bal Harbour.

Paul James, obviously, had to return to New York to catch his breath, see his wife and lunch the gal, but then he too went back to an airport and flew to Miami.  Tomorrow, Saturday, there will be St Patrick’s Day fireworks at the gala for the 243-room luxury hotel’s opening.

The guest list for this, by the way, includes many Brazilians who were so enthusiastic about last weekend’s polo that they said could they come to Miami?  They have their private planes at the ready, and will combine the hotel’s opening with yet another trip to Bal Harbour Mall, just across the road, to fill their fuselages with the designer goods that cost twice as much back home.

What will they remember?  Two words.  St Regis (he, a Jesuit monk who tended the weary traveler and after whom a lake in upper New York State was named).  That is brand management.