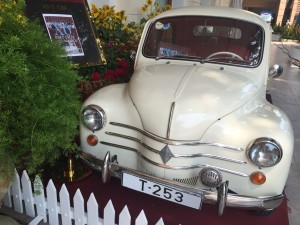 There is something intrinsically appealing about Ho Chi Minh City, which got its name on July 2nd, 1976, when it was merged with the surrounding Gia Djinh Province. Many people still call it Saigon, which evokes memories of the time when it was the capital of French Indochina, from 1955 until 1975. The fact that there is lots of history, including in its luxury hotels, increases the fascination here, says the gal. Outside the city’s oldest hotel, the Continental, is a lemon baby Renault, T-253, used by Phạm Xuân Ẩn, 1927 -2006, a Time magazine reporter who was a double spy – see Larry Berman’s book, X6: Perfect Spy. 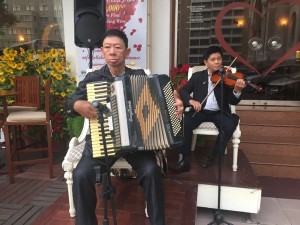 The Continental, now owned by Saigon Tourism, was built in 1878 by Pierre Cazeau to look after French travellers. Go into its lobby and you feel little has changed. Outside, musicians playing on its café terrace are probably, like their counterparts in the Jazz Bar at Shanghai‘s Fairmont Peace Hotel, just descendents of those who have been making music here for over 120 years. Most of the young people around today are in blue jeans but, on special occasions, the women look so elegant in their long áo dài tunic coats, worn over trousers. Twenty years ago women wearing this stylish uniform cycled everywhere, with crisscrosses at road intersections that were frankly hair-raising. 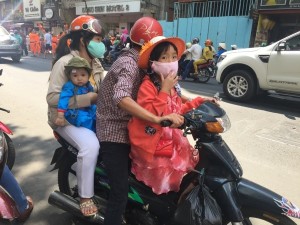 Today there are traffic lights, and bicycles have been been replaced by what must be nearly a million scooters and motorbikes (with few buses and no other public transport, and prohibitively high taxes on cars, there is no other way of getting around). One wonders how people find their own bikes when there are several hundreds parked in outdoor, or multi-storey indoor, car parks. Whole families get around. The mothers are still remarkably slim but, oh dear, far too many of the men have what could be called beer bellies and their kids, especially little princelings, are often definitely overweight – I am told some mothers forcefeed them with whole milk powder, to put on weight. 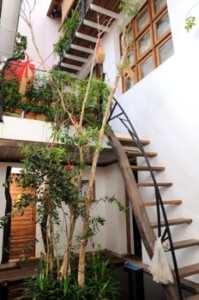 The only way to Cuc Gach Quan’s upper floor

Visitors do not put on weight at one of the world’s most fascinating restaurants, Cuc Gach Quan, owned by prominent local architect Binh Tran. He wanted to emulate his grandmother’s house, and her cooking, and he has turned two old French houses, one either side of Dang Tat, into culinary theatres. See in the photo how you might have to climb up an outside staircase, made of recycled wood, and then, up there, duck under a low overhead to get, as I did, into what is frankly a table set inside a four-poster bed. Let the servers, led by Binh Tran’s sister Hyong Nguyen, order for you. It is Vietnamese food, and totally delicious. Dishes – see some, on the video below – come thick and fast, and you are surrounded by every top international traveller who has been lucky enough to get a reservation (this is said to be a favourite hang-out of Brad Pitt and Angelina Jolie, when in town). Only once before have I dined within a bed, at Madrid‘s luxury Westin Palace hotel. More establishments should be as daringly whimsical as this.