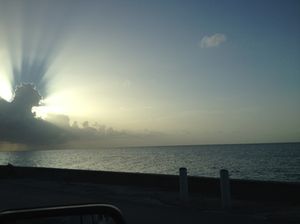 Where are the most beautiful sunsets? The gal remembers drinking Dom Pérignon with Mark and Napha Hehir on the beach of Anantara Phuket, and goodness knows how many other glorious sunsets throughout the Indian Ocean, on Mauritius, in the Maldives and Seychelles. But this one, from what will be the truly amazing Baha Mar complex of luxury hotels on the Bahamas’ New Providence Island, to the west of Nassau, is unlike most others. The colouring is so subtle. 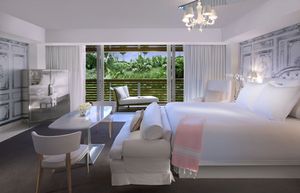 Looking out from SLS LUX…

When Baha Mar begins to be more widely known, prior to its opening in the second quarter of 2015, the world will sit up and take notice. This is one mammoth project, 1,119 acres, a spend of at least $3.5 billion, and five hotels offering a total of 2,900 rooms. One hotel, SLS LUX, is still a prototype. Why? Firstly it was destined to be a Morgans hotel until a couple of months ago, when SLS boss, Sam Nazarian – note the ‘ian’ at the end, signifying Armenian heritage – flew in from the US to see another ‘ian’, Sarkis Izmirlian, as a result of which this particular 300-roomer will be SLS. 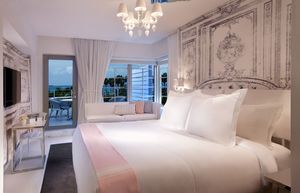 But not just any SLS, please note. This one will be SLS LUX, without an asterisk so it cannot be confused with the LUX* brand of the Indian Ocean. What makes an SLS LUX different from an SLS? Perhaps it will be even more cutting edge. Hostesses day-long will be wearing black figure-hugging knee-length gowns, but they change to white at night. White is the main colour of the rooms and suites, which have such clever things as big-wheel trolleys that are actually minibars. There is a lot of fun in SLS. Its logo looks like a chandelier but look twice and you see four monkeys having fun. 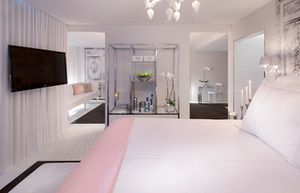 The bathrooms, by Baha Mar’s overall designer Benjamin Noriega-Ortiz, have shower walls of diachronous glass, which looks as though oil has been poured on to give a kaleidoscope of brilliant colours. How futuristic! At the same time, to give a sense of locale to this luxury hotel, bedrooms will have lots of hooks and baskets, to hang things on and to throw things into. Both hooks and baskets are known here as throws, a very Bahamian household word for ‘tidy up’.