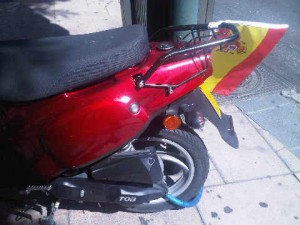 Madrid continues to be ablaze with colour.  Some of the historic buildings are stately stone, but the locals know how to put more than a bit of flamenco into life, even in current times of 50 percent unemployment among young people.

A lot of South Americans who came here to work have gone home, one is told.  Of the nationals who remain, they certainly are not hanging around on street corners (at over-30 degrees, it is too hot to wear hoodies).

People are incredibly kind.  While I was trying to work out which was Calle Goya, a charming man, a real aristocrat of an older gentleman, came up and in perfect English asked if he could help.  The gal had a smile on her face. 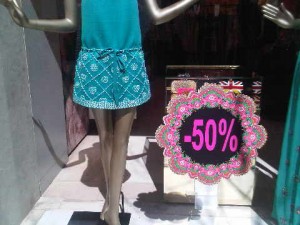 There are colourful shops in the Calle Jorge area

Walk around the Calle Jorge area and you see fabulous shops. One little side street is the Madrid version of Moscow’s Tretyakovsky proyezd.  There, a few minutes’ walk from Ararat Park Hyatt Moscow, you have a mews, revitalised by Mercury (Leonid Friedland and Alexander Reebok) and such brands as Baccarat, Brioni, Dolce & Gabbana, Gucci, Tiffany and Ermenegildo Zegna.   Here, in a side street at right angles to Calle Jorge, you have such brands as Cashmere Concept, Gant, Manoush and Vanessabruno. 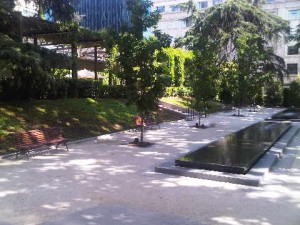 Coincidentally, this is only ten minutes’ walk from what was, until three years ago, another Park Hyatt.  Now it is the equally lovely Hotel Villa Magna, a Leading hotel and a haven for fashionistas and shoppers alike – the concierges can offer personal shopping trips to Carrera y Carrera, Loewe, tell them what you want.

But they are full of suggestions and help, this team.  One senior male concierge was patience personified in helping with a complicated flight request.  Another, female (wearing a gorgeous grey and pale sage outfit) had similar patience when being presented with a wake up request, yes four AM – and it came through on the dot.   At other times, this team will suggest you actually take part in a flamenco class, or learn to cook Spanish tapas. 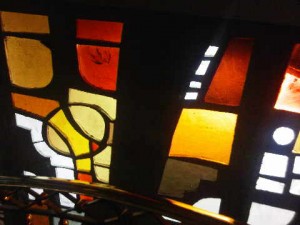 The hotel, one metro stop north of the Prado but also on Paseo de la Castellana, is a nine-floor, 1972-vintage construction with lovely gardens in front.  Sitting out on the terrace of the bar – meeting place of many mature locals, on a regular daily basis – there are enough surrounding bushes to give maximum privacy.

Sit inside and the acoustics are such that no one group can (perhaps frustratingly) hear another’s conversation.  Order a cocktail here and it may well be made in front of you.  Here, a request for a Bombay Sapphire gin and tonic results in a tall stemmed glass filled already with ice, and the contents of the blue bottle poured in virtually until you say stop, after which Fever-Tree is similarly added.  Wow, Fever-Tree again.

The ghastly Irene Rosenfeld, boss of Kraft and thus Cadbury Schweppes, should be worried stiff that the distinctive yellow-label Schweppes tonic is losing its edge (after buying that English heritage, Cadbury’s, and breaking her promise not to close factories, she had the arrogance to refuse to accept an invitation from a parliamentary committee to answer a few questions). 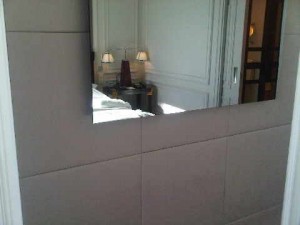 Reflectionin a room mirror, which also hosts the television

Cocktails of course precede dinner, in this case chef Manuel Gutierrez’s local cuisine in the hotel’s most agreeable restaurant.  Accompanied by a glass of Ribera del Duero Pago de Carraovejas 2009 Crianza, the Spanish last supper started with Octopus carpaccio with a tower of avocado and tomato, and went on to Baby kid, slow roasted on potato mash, side of creamed broccoli.

Last time this kid ate kid, so to speak, it was with that great winemaker Miguel Torres.  It was simply grilled, with a side of spinach, oh yes I remember it well, and that wine of course was Torres.   I shall also always remember this restaurant, a confection of taupe and darkest brown, with a clever mirror at the far end which has Art Nouveau patterns on it.

The designer Thomas Urquijo has done well.  He had a challenge when he was brought in by the hotel’s chairman, Maude Mendonça de Queiroz Pereira Lagos.  1972-style stained glass, in bold colours, fills all the rear wall of the hotel’s central stairwell, bottom up. 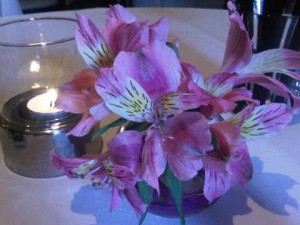 Flowers on the table in Villa Magna's most enjoyable restaurant

Some would take an elevator but, for the fit, it is 134 steps from the ground floor up to the seventh floor. Room 720, one of 164 total, was absolutely lovely…  it is necessary to explain that my main experience with Spanish interior designers, female, had not been memorable.

Now I cannot wait to see more of Thomas Urquijo’s work and were I planning a second or third home, or even one’s main base, he would top the list of designers.  He understands users’ needs, with easy-see, and easy-work, light switches, and more than enough storage even for the world’s top fashionista.

His work is up-to-date.  His televisions are hidden in wafer-thin mirrors (the ‘works’ must be recessed into the wall behind.  In the bathroom he has installed the heated electric towel rail that should be de rigueur in all luxury hotels.

Here, his champagne ceilings have big square central recesses: in each corner of the recess, a white 90-degree hanging bar (like an L with both arms the same length) reflect light up, on to the ceiling – which thus diffuses through the whole area.

Maude Lagos, who is Portuguese (she also chairs the other hotel owned by her family, Four Seasons Ritz Lisbon), apparently wanted the very model of a model English gent to run this lovely Leading hotel, and she found him in Charles Morris – whom I first ran into when he was wearing Indian Ocean shapeless gear at Soneva Gili in the the Maldives.

Now he is Savile Row perfection.  There are elements of anglophilia throughout – the room service menu has a whole page of different teas, including the ‘Ceylon Desteinado, a very English taste, this tea can be drunk all day long, either with a slice of orange or a drop of milk’.  But this is not an exclusively-Brit place.

There is an Italian vitrine, for Ferrari, in the lobby, and Italian gym equipment in the lowest level (24 steps down from the lobby), and there is an Asian restaurant out-back, behind which is El Corte Inglés local department store.  The hotel limo is German, the orchids are Thai and the guests, well, a tremendous number of them are from the Americas, with more than a few football addicts attracted by the Real Madrid stadium not far away. 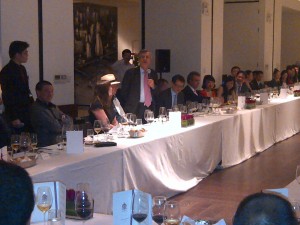 There will quite possibly be tip-top Chinese rushing to Madrid, too.  Last week Bart Raaphorst, canny director of Villa Padierna, just outside Marbella, was in Shanghai to co-host, with the Spanish ambassador H.E. Gonzalo Ortiz, a dinner at the sensational Roosevelt House at 27 The Bund.

This boasts the largest wine cellar in China, and its Chairman, Tweed Roosevelt, nephew of FDR, is also Chairman of the Theodore Roosevelt Association.  Raaphorst introduced Villa Padierna Palace Hotel, where Michelle Obama famously stayed in August 2010, to 65 members of the invitation-only Roosevelt Club.

They all received memberships cards for Villa Padierna Golf Resort, with lots of benefits. Raffle prizes giving complimentary Palace stays were won by jazz supremo Lin Dong Fu and movie director Stanley Tong, and an auction benefited the Red Cross.  It was a great success, says Bart Raaphorst, who flew back from Shanghai via Qatar, where he had a similar card-giving exchange with the Doha Golf Club.