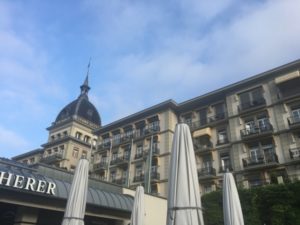 Looking up at the hotel..

It was so GOOD, said the gal, to be back in Interlaken, after a gap of four years. A lot has happened in the interim. It seems that the town has really pursued the tourism market, although it is perhaps not a right match to have so many souvenir shops right next to Interlaken’s premier luxury hotel, the gorgeous Victoria-Jungfrau Grand Hotel & Spa. Interestingly, although it dominates the north side of Höhe-Matte park, it is right next to an absolute eyesore, considerably taller than its own six floors, a monstrosity that should never have been permitted. But forget local politics. The good thing is that the hotel, which now has 212 rooms, has been brightened and lightened, and feels more youthful and vital than ever. 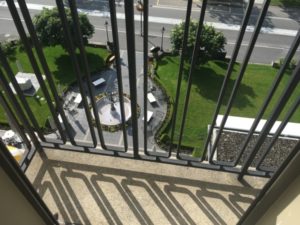 ..looking down, at the new front garden

In the evening, I looked out of 404, a duplex suite facing south over the park to the Jungfrau, and watched, every two minutes or so, paragliders landing on the lawns about 50 yards away – If you want to know what paragliding is like here, by the way, SEE THE VIDEO BELOW. There is nonstop activity here. A batch of vehicles with Qatar number plates was returning from an expedition. Hikers with serious boots and sticks were also coming back to base after using up quite a lot of calories. For others, of course, there is retail exercise – the hotel even has a Watch Concierge for anyone who needs help on brands. And for variety the hotel has a snooker table, in its main library. 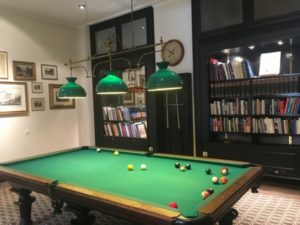 I am trying to think when I last stayed in a hotel that really is run by two GMs. Here Urs Grimm and his wife Yasmin Grimm Cachemaille do have separate duties but, like most working in any hotel in Switzerland, they are multi-skilled and will turn their hands to anything (when I arrived, Urs Grimm was behind the desk helping one of the concierge team). I dined with the Grimms in the eternally-youthful La Terrasse, where the menu cover now has the same wicker-work pattern as on the chairs. The offerings are deliberately simple, said Yasmin, or was it Urs? The choice is seven starters and seven mains and I had a scallops ceviche with lemon and fennel, followed by braised veal cheeks with herb purée (of course we drank Swiss again, namely P.S. Manfred Meier 2013 PN Selection). 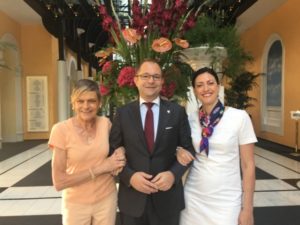 In the morning I went to the breakfast buffet, now in the mediaeval-feel Brasserie, as soon as it opened, but there somehow seemed to be about 50 already there before me. Many of these breakfast enthusiasts were being helped, at the various buffet stations, by absolutely charming staff, mostly highly experienced ladies who patiently assistant non English speakers on what is what. After I had finished eating, a Portuguese concierge had my requested bike ready, and I rode for an hour, past the haunts I remembered from earlier visits plus going through the neighbouring Matten village. And then, all too soon, Mr Portugal was ready in the Rolls to drive me back to Interlaken West – yes, even a town with year-round population of about 6,000 warrants two rail stations here in Switzerland. Paragliders were already coming down into the park in front of this truly lovely luxury hotel. NOW WATCH THE VIDEO BELOW