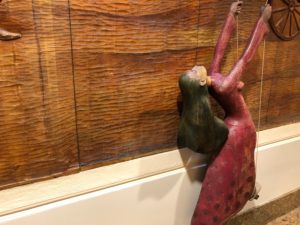 Wall carving in the lobby

Twenty team members from InterContinental Budapest have just returned from Davos – they must be so pleased to be back home. When Forum Budapest opened in 1979 it quickly became what some readers’ polls said was the best business hotel in the whole of Europe. Akos Niklai was the GM and he must have been pleased as punch that he beat sister hotel Duna InterContinental Budapest. But that was last century. The Duna switched to Marriott and what was the Forum is now InterContinental Budapest, and it is a luxury hotel that continues to delight business guests and, says the gal, many others. There are unique touches throughout. By the four elevators on the ground floor, at the back of the lobby, is a wood carving with three-dimensional figures hanging on it and off it. Upstairs, over 200 of the total-402 rooms and suites have amazing views across the Danube to Buda and Buda Castle, shown above. 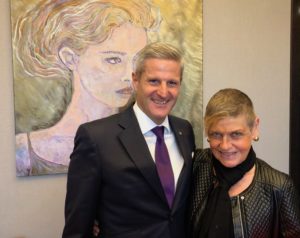 I was in room 615, one of those Buda-facing rooms – just before midnight I woke up, a reminder that I am still on Indian sub-continent time, and the Castle’s illumination was so splendid I reached for the iPhone to take a quick shot. Alas, I was too late. Silently, midnight tolled and Cinderella’s carriage turned back into a pumpkin but more importantly in this case the Castle went dark. I thought, later, that this is a really well planned room. A window opened, for fresh air. I could find everything I needed really quickly and there was plenty of storage space. Simple things like having the room number on the telephone really make a difference too – but then the hotel GM, Claus Geisselmann, knows that all those little things add up. 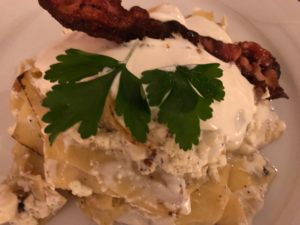 He is adding another 40 staff this year to increase service levels, taking his team up to 260 total. How does he find people in a city where unemployment is under four percent? By working with local colleges he gives students stages, opportunities to learn not only about the hotel business but such facts of life as interviewing skills. They go back to finish their studies and not surprisingly 80% later return to start a two-year apprenticeship in the hotel. Some have itchy feet and want to travel, but Claus Geisselmann, who has been with the extended InterCon family since 1993, helps them to transfer within the group. Some, of course, stay. They must be as well looked after here as the guests: I hope they, too, are able to enjoy such comfort foods as the Hungarian quark noodles with bacon that I had, with a glass of Etyeki Kuria 2015. 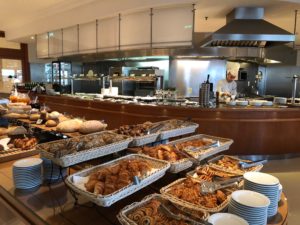 Club Intercontinental at this luxury hotel is on a par with those at the London, Hong Kong and Sydney hotels – stunning views, superb product. I loved having choice of three hot, or three cold, canapés, served on three-tier curates’ stands, at evening cocktail hour. And at breakfast the lounge once again has very stylish offerings – see the video below. I also checked on the main Corso breakfast, which has one of the most copious selections of breads anywhere. This is a really thoughtful hotel. The 24/7 newly-redone LifeFitness gym is right next to both the club lounge and the pool, sauna and spa (which this month is offering ginger facials, and white chocolate wraps, as specials), and down 27 steps to the main lobby floor there is a beauty salon, ATM, stylish souvenir shop and an open-any-time business centre with four new Macs. What more could any business traveller, or anyone else, want? NOW SEE VIDEOS OF ROOM 615 (CHECKING IN AT NIGHT) AND THEN BREAKFAST IN THE CLUB (BEFORE SUNRISE)