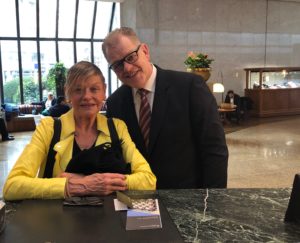 The gal has written for many years about her annual visit to InterContinental Berlin and 2019 was better than ever. Even the arrival was marvellous, with omnipresent GM Aernout De Jong, there in the lobby to count guests in: the lobby was already set up for the International Hotel Investment Forum IHIF (see above).  This is a venerable hotel – 1978 vintage, if you must – that is used to filling all its 585 rooms, though at such peak times as IHIF, occupancy is invariably one person only.  Now, all you creators and disruptors, can someone devise a formula whereby usually-double rooms can become two separate singles when necessary? Surely some start-up will work on that. 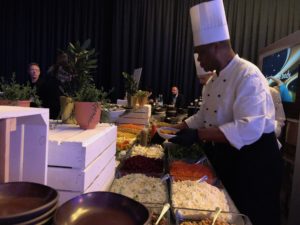 There is certainly creativity here on the food side. During last week’s IHIF there were 2,400 delegates to feed (not long ago the hotel catered a ball for 3,500 guests, half of whom had a seated banquet which the others buffeted). On the only full day of IHIF, lunch was a move-around feast.  In about 90 minutes the hotel staff turned what had been the theatre-style ballroom into a restaurant, with sit-high tables and sit-low tables and lounging sofas. What was so clever was that everything was plated publicly.  Island serving stations had short conveyor belts with people composing dishes as they passed along – it was, in effect, a simulation of how airline meals are plated before being taken to planes. The similarity, of course, is only with first class on the best airlines. 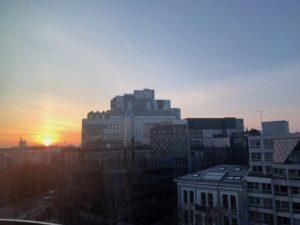 Everyone at this mega-hotel seems to know my idiosyncracies. They know my favourite room is 837, which looks out over Budapeststrasse. It is conveniently only two minutes’ walk along to the club lounge, which from 6.30 a.m. on is the meeting place for everyone who has access to it. Hello, say Melanie Krueger and her team, how nice to see you back again. They are used to non-stop business here as one group leaves and another one comes in, but even though the turnover is so quick the room attendants, a bevy of Asian women with an instant ability to understand how you want your Wunderkind toiletries displayed, work as if in a sprint race rather than a marathon. 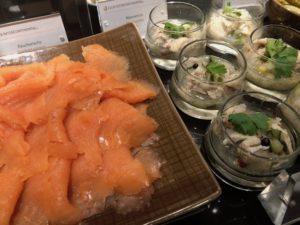 Variety on the breakfast buffet

IHG hosted the main IHIF gala evening (see a video, below, showing how stations were themed for each of IHG’s brands, including Regent).  And presumably the kitchen staff were also catering private events throughout the hotel. Every room that could hold a small lunch or dinner seemed to be taken. The hotel’s main all-day dining Café opened up at least four adjacent rooms to cope with breakfast – see another video, below. The whole thing ran like clockwork, but with humans giving the personality. And just as the boss had counted me in, his marvellous right hand, Christiane Reisberger, was there to see me on my way to my next place. AND NOW SEE ROOM 837, AND IHG’S PARTY FOR IHIF