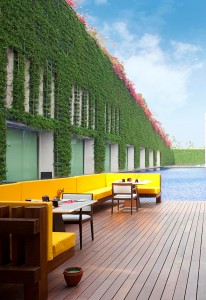 The Oberoi, Gurgaon, has the world's largest living wall

Time to talk India, where there is always something interesting happening.  Leepakshi Chopra, the luxuryindia gal-to-know when it comes to the Indian luxury scene, says The Oberoi, Gurgaon has taken the world by a storm (she admits an insider interest – her husband, Kapil Chopra, is VP for this sensational hotel and its adjacent sibling, Trident Gurgaon).

Leepakshi says the 187-room Oberoi, Gurgaon is definitely ‘one of the most design-oriented hotels with stunning views – and it challenges conventional city hotel design norms in every way.

‘Take the arrival. You pass through 10,000 sq m of forested driveway which takes you up, four floors in height, to a shining steel and glass lobby on the top floor of the hotel. This ‘forest’ drops off, from a height of 20 metres, becoming the largest vertical green wall in the world. It is quite a sight to see a 20-metre tall vertical green wall, 109 metres long.

And it has a twin, parallel to it – and between the two is a 120-metre wide cobalt-blue decorative pool.  At the far end, 180 metres away, teakwood dining decks allow you to sit and eat, or merely watch, just a few metres from the water.

‘Retail brands in India are reporting 30% year-on-year growth in sales. And there are new luxury store openings virtually every month. Genesis Luxury owns the rights to some of the most iconic brands in India including Bottega Veneta, Burberry, Canali, Etro and Jimmy Choo. Genesis’ Sanjay Kapoor believes that Indians are embracing luxury more than ever and are quite discerning in their tastes now. He says values are reasonable and hence sales are on an uptick.

‘A hit Hindi film Zindagi Na Milegi Dobara (“You live only once”) included a very unusual character, Bagwati. Bagwati is, in fact, a Hermès Kelly bag in orange ostrich skin, wearing a hat and sunglasses.

Fans went a step ahead to create Facebook pages and followed Bagwati on Twitter.  This Bollywood character indicates the growth of luxury product placements in Hindi movies.

Other famous brands that had their turn in the spotlight include Chanel in Punit Malhora’s “I Hate Luv Storys”, with Sammir Dattani, Sonam Kapoor and Imran Khan, and Christian Dior in “Aisha”, Rajshree Ojha’s modern-day take on Jane Austen’s Emma, starring Abhay Deol and, again, Sonam Kapoor.  In both romantic comedies the movies won more accolades for trendy clothes and accessories!

‘There is also a parallel economy in India, where the amount of unaccounted cash transactions is maybe the highest in the world. This means there is huge unaccounted money and India’s rich are enjoying access to luxury retail. 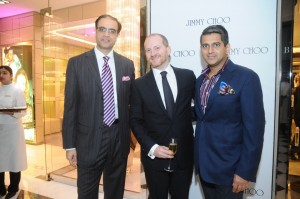 ‘Key international brands want to be part of the act.   Industry body CII, led by president B. Muthuraman of Tata, and The Economic Times hosted a roundtable on October 11th, 2011. Participants included Angela Ahrendts from Burberry, Michele Norsa from Salvatore Ferragamo and Joshua Schulman from Jimmy Choo.

Also, one of the high points during the conference was the opening of the Jimmy Choo store at The Oberoi, Gurgaon, and a great party that followed. The markets may be down and inflation is high – but luxury retail and hospitality in India is on a glorious rise!’   Thanks Leepakshi, look forward to your next report!