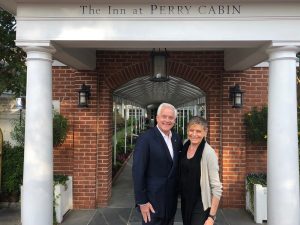 The 112-acre Inn at Perry Cabin estate at St Michael’s MD gained operational independence as of early 2019.  The Inn has turned to Preferred for support and, says MD Perry Cabin Resorts & Golf Michael Hoffmann, it is working just fine.  The Inn itself, which has 78 rooms, sees about 50% small groups, and nearly all business is domestic, driving for up to four hours to get here.  25% is repeats, showing much everyone values the product when they get here.  The gal actually arrived by Amtrak rail – BWI station is nearly two hours’ drive from the resort. 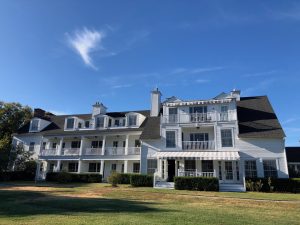 Looking up at the main building

The Inn has been continually expanded from an 1816 cabin: it first opened as a hotel in 1980, with six rooms – today it has 78. The sprawling building is meticulously painted in white, which evokes memories of the Forth Bridge, finish painting one end and it is time to start again, from the other end.  Once again, I was in #43, a meandering room that snakes past an eatertainment area to living area to bed area and on to bathroom area: it is immediately welcoming, and having its own door to private deck and down to what seems like acres of grass and the Miles River gives an illusion of yet more space. Adirondack chairs set on the river bank provide a lasting vignette, see above. 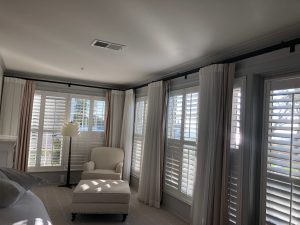 Since my last visit Alexandra Champalimaud has re-done interiors and #43 has gained an all-white appearance – even my 40 sets of horizontal wood shutters are now like snow.  There are still a few sailing mementoes on the walls and the overall effect is extremely pleasing.  Once unpacked, I started the programme Michael Hoffmann had planned. We drove to see the now re-designed Pete Dye golf course and even this non-golfer exclaimed at the beauty of some of the undulating holes (one has the hole itself seemingly on an island surrounded by water)l There is an unbelievable array of eight simulator cubicles, allowing any number up to eight to ‘play’ against each other on hundreds of well-known courses worldwide. 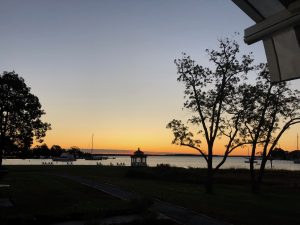 Another day in paradise

We continued our tour, looking at a separate group of buildings that were once lodgings and may well be so again.  Back at the main Inn, I was shown three new outdoor tennis courts and where other rackets games are planned (there seems always to be so much going on here). I met up with the entire senior management over drinks in a small courtyard outside the pub bar, and then, over dinner, I heard about the annual St Michael’s Concours d’Elegance that had just taken place: this luxury hotel is not surprisingly a major sponsor, together with the nearby Chesapeake Bay Maritime Museum –   2019 Best in Show was a 1933 Isotta Fraschini Tipo 8A. In the morning, the sun came up. Others could plan their activities, which today included spinning, kayaking, touring the garden, judging wine, cornhole throwing, sipping-and-painting, and a visit to Lyons Distillery. But I, sadly, had to leave this divine retreat. EXPLORE ROOM 43, INSIDE AND OUT