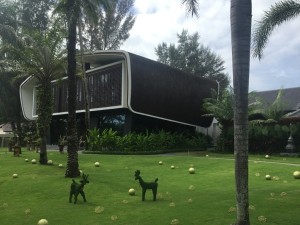 ‘Animals’ move around the welcome lawn, the Penthouse Suite behind

The gal had been tempted by Iniala Beach House, Phuket, for sometime, but seeing it is believing: even in today’s wow-filled world it is still possible to be unique. Take 800 feet of pristine land and go for the best. That was obviously the maxim of UK financier Mark Weingard. He woke up in the middle of one night and thought of its name, Iniala, after an African river. Another night – whether before or after is not recorded – he had another inspiration. He would invite Brazil‘s Campana brothers over, to see the spot. They were so enthused they agreed to design part of the whole, as a result of which other designers came on board. As a result the ten-bedroom luxury resort hotel is an amalgam of utterly original design styles. 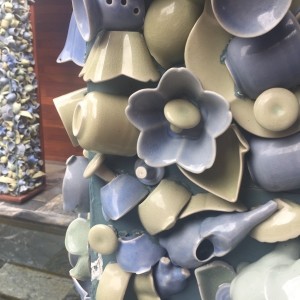 The Campana brothers covered some walls entirely in real celadon

Rooms are in three big villas, Bianca, Collectors and Siam, with an additional Penthouse Suite, above Aziamendi (see below). Each villa has its own pool – look between Collectors for a great beach view (see above). Collectors, to me, is especially interesting. The Campana brothers – whose work I first came across at Emiliano, in their native São Paulo, have here filled some of Collectors’ shared areas with real celadon china, from Chiang Mai, simply stuck on, as shown. This is the villa, too, that comes with a 22-seat screening room, with fluffy green sheep-look seats. Collectors also features an octopus, a giant leather beanbag with eight radial inbuilt loungers. Bianca, by contrast, has a circular white stone dining table with seven high-backed white chairs that, slotted in under the tabletop, provide a 360° retaining wall. Back to Collectors – the sexiest of all the bedrooms is the boudoir, by Mark Brazier-Jones, its 34-inch high bed crowned, as it were, by a bottle-green bedhead with central panel that changes colour from pink to purple to blue (you can turn it off). 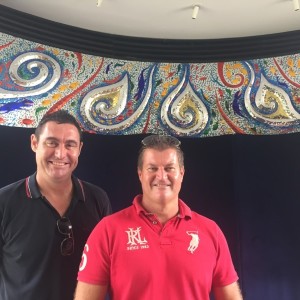 Stay at Iniala and dine when you want, wherever you want. Clever guests buy a package, for an additional $300 per person per day, which allows unlimited food and premium alcohol, 24/7 use of a chauffeured car and an hour’s spa treatment, daily. Choose to eat, as savvy Phuket residents do, at Aziamendi, overseen by Bilbao‘s talented Michelin three-star chef, Eneko Atxa of Azurmendi. It is worth noting that the two who so cleverly look after Iniala, English-born Danny Drinkwater, formerly executive chef of Park Hyatt Sydney, and Australian Wayne Milgate, previously GM of North Island in the Seychelles, head a team of 110. Why so many? Well, the hotel’s bakeshop supplies seven other hotels, and two shops, plus the adjacent Iniala White event space, which currently has an outdoor Wonderland pop-up restaurant complete with dozens of pink flamingo sculptures and standing doors, set, without walls, among trees near the beach. 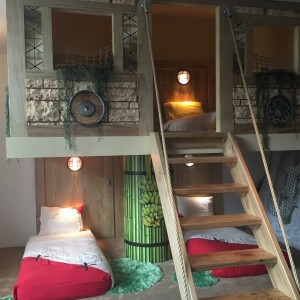 Part of the sensational Kids’ Hotel