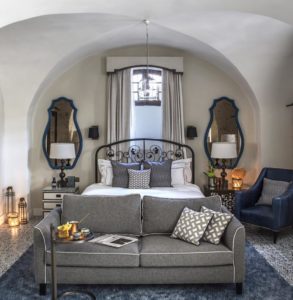 South African Inge Moore started the design for Isrotel’s The Orient by Isrotel Exclusive Collection Jerusalem when she was still with HBA, but her touch remains – this is the same signature that you find, for instance, in the stunning interiors of Belmond Andean Express luxury train, and such luxury hotels as The Alpina Gstaad, and InterContinental London Park Lane (now co-owner of Muza design, she is working on Belmond Miraflores in Lima).

The 243-room The Orient Jerusalem is part of Isrotel, the versatile hotel group owned and run by Julien Lewis (it was started by his late father, England-born David Lewis, founder of the River Island fashion empire). The hotel is partly an expansion of two Templar buildings dating back to the 1880s and a Templar association features in some of the bedrooms (an additional new block has a rooftop infinity pool).  Among public features are sculptures, relating to Jerusalem past and present, by students of Bezalel Academy of Arts and Design. Sarah Williams, Senior Project Designer of HBA London, says: “Building the narrative for the hotel was a fascinating journey of discovery through old Jerusalem, the German Colony and, indeed, the two buildings themselves. While the new building is clearly modern in form, the many references to cultural and artistic inheritance mean old and new hold together in a meaningful and memorable guest experience.” GM of the hotel is Amit Bahat.