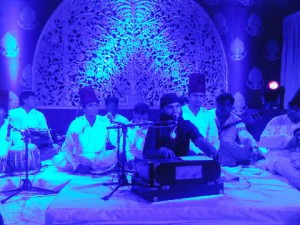 Sufi at The Imperial Delhi

Last Saturday, October 20th 2012, was the best party at The Imperial Delhi since the hotel launched its Chanel boutique – at which time a special catwalk staircase was laid from the upper floor terrace down to the gardens below.

This time, the gal dares to suggest, the party was even more important.  Chanel, darling?  This was a gala for 300 of the best-dressed people in the world and Armani through to Zegna, with lots of saris in between, was order of the day. Arrive, to sufi that chilled the spine in the nicest possible way. 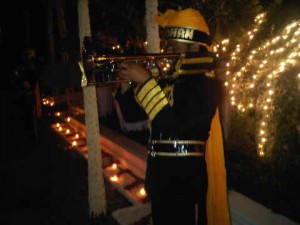 Arrival to a military band....

Actually one arrived to a guard of honour, a full military band.  How is it Indian military all have backs that are vertical with not a half degree of curve?  These people look so splendid in full regalia, playing their best.

The arrival procedure also included walking through a 50-yard tunnel formed entirely of jasmine flowers threaded on strings. The perfume wafted from above and both sides.  It was magical, with the music also wafting, on the airwaves.

The Imperial sits on eight acres of land, right in the centre of Delhi, on Janpath.  It has been an oasis of calm ever since it opened in 1931 (it was part of Lutyens’ plan for the capital of India). 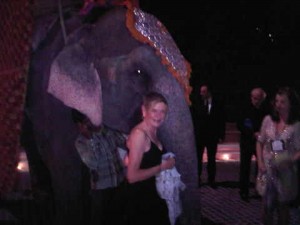 .. and a friendly elephant

There was an elephant too, a friendly guy who attracted a lot of photographic attention – Lindsey Ueberroth said later she mounted it, not a good thing in a tight skirt.  When I stayed in the hotel’s 268 Art Deco Suite, one of the photos on the walls showed Lord and Lady Curzon, sensibly dressed and sitting in a howdah, entering Delhi on the back of an elephant for the Coronation Durbar in 1903.

That suite, by the way, is one of many in the 234-room hotel that is a potted history lesson all in itself.   There is also a photo, at the same Durbar, of the marvellously bejewelled and turbanned HH Thakur Saheb of Limbdi KCIE. 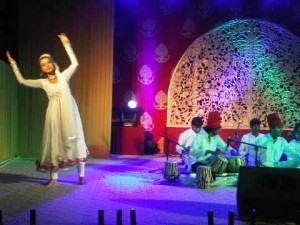 More sufi, different lighting - and one of the dancers who will twirl increasingly faster

So we arrived, in the hotel’s marvellous gardens, to find 35 circular tables covered in red cloths, and two massive red gazebos and another red-tented alcove – have your photograph taken, wearing a Rajasthan safa hat, a scarlet turban with a tail that goes halfway down your back.

My Big Fat Indian Wedding is the title here.   Others of us walked around, chatting, with Laurent-Perrier Champagne freeflowing as if there were no tomorrow.  Well, there certainly might not be any Laurent-Perrier tomorrow, it has all been drunk.  This is Laurent-Perrier’s 200th birthday year, and a new Cuvée of the Alexandra is planned…

As the stage colours changed continually, we watched yet more sufi, with sema dancers who twirled and twirled faster and faster as if they were whirling dervishes. 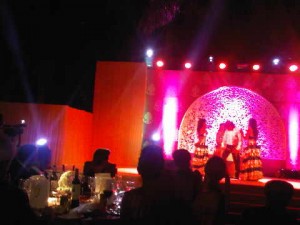 ..and sufi was followed by the history of Bollywood...

Sufi music is most commonly the qawwali found in Pakistan and northern India.  Here, the singer chanted love songs as if in contralto, the vibrations almost going into one’s spine.   This part of the evening finished, we progressed to Bollywood past and present.

Bollywood, which got its name in 1899, 11 years before Hollywood produced its first movie, is reckoned to have made some 30,000 films have been made and become a household name worldwide.

Bollywood holds masses of records: the film with the most songs (Indra Sabha, 71), the longest film in the world (LOC: Kargil, four hours, 25 minutes).  Bollywood, of course, is in mourning right now, for the death of Yash Chopra. 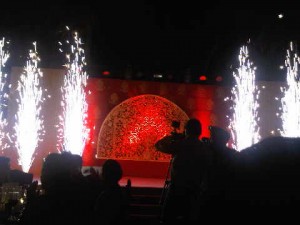 .. with intermittent bursts of fireworks...

That night, the dancers danced, the audience ate.  Overseen by Swiss chef Willie Haueter, this was a thali meal.  Everyone was brought a silver tray, with a liner of a big banana leaf.  This held Navratan biryani, traditional Awadhi rice with vegetables and saffron.

Around the edges were small dishes, your choice of veggie or non-veggie. The latter gave you chicken in spinach and cilantro puree, lamb with cashew nuts, cauliflower with ginger, black lentil dal, and churned yoghurt with garlic.

Waiters, in the long-tail red hats, came round again and again with just-made naan and roti breads.  Other waiters came round, fortunately less often, with wine, and much-needed water. From time to time bursts of fireworks lit up the night sky. 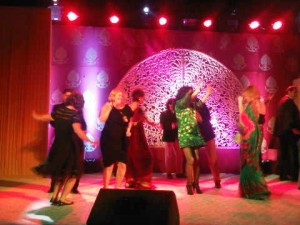 .. and then the unofficial dancers, led by Lindsey Ueberroth, in black, took over

The sufis had been sufficient.  The Bollywooders had either gone home or on to their next gig or to get ready for the next massive Indian Film Festival (Zee Cine awards), April 9-14, 2013, Los Angeles.  The highest paid Bollywood actor this year is Aamir Khan, who ends up with 40 crore ($7.5 millIon), including endorsements, per movie.

I am sitting next to a lovely new friend, who tells me with the most enormous smile about her own arranged marriage and how her daughter, aged 23, would not go into Bollywood as it is so corrupt… 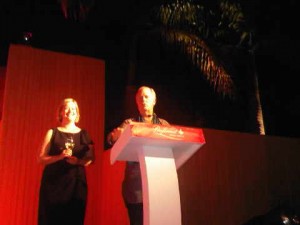 Lindsey Ueberroth and her father, John Ueberroth, at the podium

But the dancing continues, and now it is the time of the amateurs.  Fuelled or pepped by the atmosphere and being in such a friendly and stylish ambience, some of the Armani-Zegna crowd leapt to the stage, led by Lindsey Ueberroth (what an evening she had, starting with that elephant ride).

Anthony from Beijing had to rush to a plane, but he seemed to delay his departure as everyone was having such a thoroughly good time.  It is a funny thing, if the music and the time is right, anyone can dance.

This was gangnam with straighter legs, no horse between the thighs. Lindsey had one more important role to fill.  In her capacity as President, Preferred Hotel Group, she and her father, John Ueberroth, company Chairman and CEO, had the stage to themselves as they announced the winners of the previous day’s photo safari.

Teams of hoteliers had ventured far and wide throughout Delhi to weave stories around beauty, colour, chaos, history and traffic jams, a team-building exercise that had been just one feature of the phenomenally-successful Preferred Hotel Group meeting…