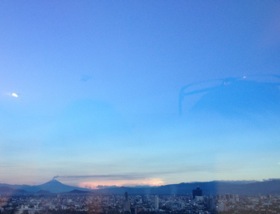 It looks as if Popocatépetl is erupting…

First, what a treat. Look carefully and you can see ash and steam coming up out of Popocatépetl (man of fire), Mexico’s second-highest peak at 17,802 feet (tallest is Pico de Orizaba, at 18,491 feet). The volcano is 43 miles south-east of Mexico City but, because of pollution, it is quite rare to see it in such glory. Anyway, here it is, and everyone around me at the luxury Hyatt Regency Mexico City hotel was snapping away as fast as their cameras, or at least smartphones, would allow. 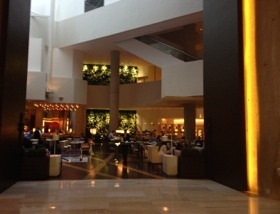 Looking through to the multi-storey lobby..

I was actually in the hotel’s 40th floor Regency Club lounge when I took the picture, but I spent most of my out-of-bedroom time at the 734-room hotel in the lobby. In the LOBBY? Yes. When the hotel opened, way back in 1987, it was Nikko and apparently had an incredibly formal lobby with waterfalls. In 2012 Hyatt bought the 44-floor building and not surprisingly put in Hyatt as management. The great Kurt Straub was pulled over from Zurich to supervise a $40 million new look, by designer George Wong. 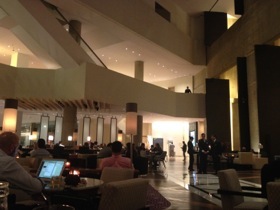 Most of this money appears to have been spent in turning the lobby into what feels like the inside of a pyramid. It soars up and up, but at ground level it has over a dozen different areas, all flowing into each other. The entire area, Rulfo Paraje Latino, seems to be a consortium that includes a white-tablecloth restaurant, protected at night by folding glass wall panels. Elsewhere you find a high-set communal table that will seat 14: there are normal-height tables, and chairs, and lounging areas. Theatrical lighting illuminates a working kitchen, and a free-standing ceviche bar, and highlights a two floor-high living wall. 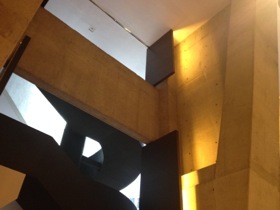 There is a bakery, with Tom Chandley oven, and next to this is an oh-so-cute Amado chocolatier. At any time, solo people are working laptops and tablets, and suited businessmen converse and do business or whatever. Up to 255, total, can be seated here at any one time, and some will undoubtedly glance up, at the sculptured shapes of the building’s original concrete support columns and a new all-black stairwell. The chef, Rafael Casas, admitted it is somewhat of a challenge operating this space (people sit where they want, eat what they want, in my case a meal accentuated, at his insistence, by a multi-coloured organic tomato heirloom salad and, later, his multi-coloured organic carrots). 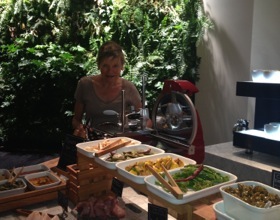 Rafael Casas runs eight kilometres a day and I thought I would follow his lead, but new arrivals here, at 2,300 metres above sea level, find that difficult, though I did cross Reforma to the National Auditorium. Instead, I used the luxury hotel’s gym, a temporary affair in a chandeliered meeting room as the real one is to be part of what remains of that $40 million spend. And at breakfast, being somewhat nosy, I had to inspect the coffee station in front of Rulfo’s living wall.