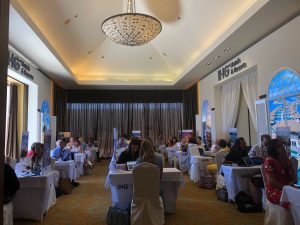 Any ILTM is a must-do event, both for luxury hotels and other exhibitors and for the discerning travel advisors, the ‘buyers’. The eighth annual ILTM North America, held 23-26 September 2019, was no exception. As its name implies, this is a show for those who advise luxury travellers from Canada, USA and Mexico, and there were 360 invited travel advisors from 153 cities in those three countries.  They were meeting up with 360 exhibitors, from 60 countries, super-keen to cement their North American relationships and attract yet more business. During the three days’ speed-dating, exhibitors stay put, advisors move at the bell. Marriott Luxury Brands’ 30 exhibitors had two dedicated rooms, IHG’s 12 hotels had another, and there were specified rooms for Accor, Belmond, Hilton luxury, Hyatt, Leading, Rocco Forte, Relais, and Small Luxury. 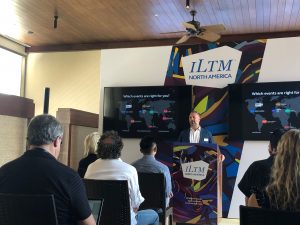 The 33 media, meanwhile, had crammed programmes.  Simon Mayle spoke about PROUD Experiences show, which this year attracted 100 hotels and 100 luxury buyers – next event, 22-24 June 2020, New York. And Tourism Australia’s packed-full performance included the icing on the cake: at Sydney Opera House, it is possible to become a one-performance supporting actor (3 hours’ training and full make-up, play your role and watch the rest of the show as part of the audience, with a video, and your name printed in the programme, to take home). Interestingly, ILTM North America media were similarly hands-on here, learning guacamole preparation and, part of Bahamas Baha Mar experiences’ curriculum, oil painting and silk screening. 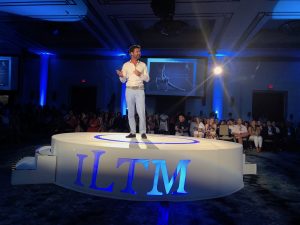 It was really stylish, from welcome bags that were lined with blue satin through to constant thoughtfulness – a day-long welcome buffet in the Fairmont lobby, and highly professional daily sunrise yoga, green juice to hand, on its beautiful beach (see above).  It was also sustainably aware: delegates’ bags held notebooks formed of seaweed, and made-in-Bali transparent bracelets, each bead formed from a discarded plastic water bottle. The opening Forum, too, showed lots of style. Event Director Simon Mayle handed over to highly popular emcee Pedro Andrade, a one-time model discovered by Mario Testino who now has millions of followers continent-wide for his television shows. 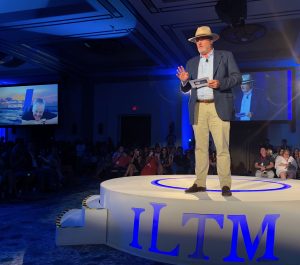 This year’s ILTM North America was dedicated to authenticity, health, nature and sustainability. Speakers included, so suitably, chiropractic Julien Paccaud, stressing the importance of sleep, and flipflop-wearing National Geographic marine biologist Tierney Thys stressing fresh air and water. The finale saw Robert-Jan Woltering, GM of the host hotel, Fairmont Mayakoba and in charge of Mexico for Accor generally, theatrically announce ‘let the show begin’, at which point a wall rolled back to reveal SLS food, drink and jazz, followed by M Gallery hospitality outside around several swimming pools. There was more than enough than for the 997 this luxury hotel reckoned it fed and watered that evening. AND NOW WALK PART OF THE SHOW, AND WATCH MEDIA TTRYING TO MAKE GUACAMOLE