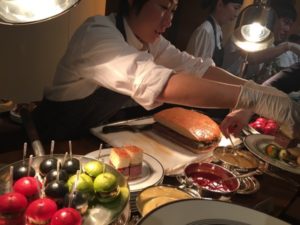 Once again ILTM Japan signalled the start of Spring – if International Luxury Travel Market is back at the superb Conrad Tokyo, then sakura, cherry blossom, cannot be far behind. ILTM Japan is the essential meeting place for all Japan’s luxury hotels and ryokans, concierge services and other suppliers to promote to the world’s top travel advisors. At the same time, global suppliers, including cruise lines, network with the best travel advisors in Japan. As always, the show started with an educational forum, featuring gastronomy and Japanese art, and then there was the first of two marvellous networking parties. Hosted by JNTO at the Conrad, there was, says the gal, unlimited Veuve Clicquot and sushi, and it was amusing, also, to see what must have been a record-beating burger, left. Highlight was Nobuyuki Hanabusa’s enra video-dance – see the video below. 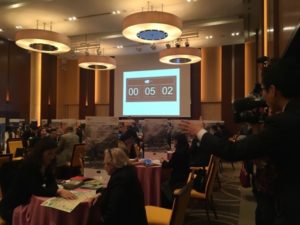 Business meetings in the main ballroom

No wonder Prime Minister Abe chose this as entertainment for the 2020 Olympics Committee (enra also opened the 2015 Cannes Film Festival). The format is that after the forum and opening night party come days of serious business discussion. Here there were two days, February 28th and March 1st, 2017, of one-on-one meetings, with exhibitors sitting at their designated tables in the massive ballroom and, at 20 minute intervals, another buyer moved up. This year, the fifth annual ILTM Japan, saw a total of 3,565 such one-to-one appointments, a figure that is 16% up on last year: it is also worth noting that this is the opportunity for suppliers to meet new advisors, as 70% of those invited here were first-timers at ILTM Japan, and 35% of the total were making their first-ever visit to any ILTM. 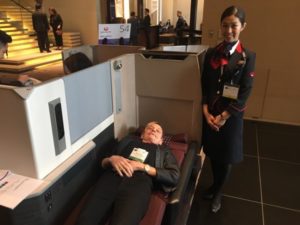 JAL brought along seat-beds to try

As always, Spotlight’s Lucy Clifton had assembled a top-notch collection of luxury media, from Canada, the USA and Mexico, UK, Germany, Singapore, Taiwan and Australia. Rather amusingly, press briefings were held in the hotel’s wedding chapel, with the cross temporarily removed.  See, above, the Ryokan Collection’s kimono-clad Sachi Tanaka explaining the 33-strong collection’s newest members, all owned and run by top international chef Hiroyuki Hiramatsu, who also has 34 restaurants, around Japan and in Paris. Outside the chapel, Japan Air Lines JAL had brought in a pack of its Business Class seats, complete with back massage facilities. 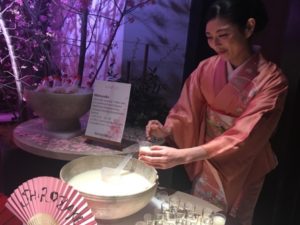 Another show-off, much appreciated by the media, was Isetan’s Luxury Bus, a full-size coach that has only ten seats, all palest cream leather and lacquer, with full lie-flat capability and a washroom as good as any five-star luxury hotel’s. We had a drive around and were dropped off for the second night’s party, another amazing networking event hosted by Andaz Tokyo Toranomon Hill. Up on the 52nd floor we celebrated, early, the forthcoming March 3rd Hinamatsuri, Girls Day. The welcome sakura, cherry blossom, cocktail was based on the hotel’s own Andaz 52 saké, and there were demonstrations of skilled painting and ceramics. Once again, first-time visitors to beautiful Japan were bowled over by the hospitality.

AND NOW ENJOY THE ENRA VIDEO BELOW…