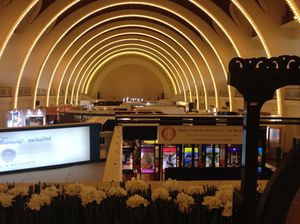 Looking down into the exhibition centre;s iconic hall

Shanghai International Exhibition Centre is unique. Think of a Soviet structure topped by a faded golden star, and you have it – built 1955 as the Sino-Soviet Friendship Building, until 1988 it was, at 110 metres total, to the top of the star, the tallest building in Shanghai. Now it is surrounded by luxury hotels. This week, says the gal, it hosts the annual International Luxury Travel Market (ILTM) Asia. The 2014 show finishes today, Thursday 5th June, 2014. Nearly a thousand people are here. Fifty percent are exhibitors, offering luxury properties, cruises and other travel services, and the other 50 percent the travel agents (hosted buyers) who choose those products, for their clients. 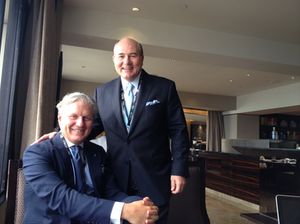 This brings many top people to town, and the knowledgeable use the 43rd floor Club Lounge of the venerable Portman Ritz-Carlton as their impromptu, as well as planned, meeting place. Two former Ritz-Carlton GMs met up here, by chance. Mark Lettenbichler is now President/CEO of Regent, just about to open their Porto Montenegro resort (fly into Tivat and they pick you up). James McBride is investor in Nihiwatu resort, on Sumba Island off Bali, and in the Chinese travel site Zanadu, and in scooping ketchup and mayonnaise, Sir Kensington, devised by two former Brown University grads in the flat they shared. 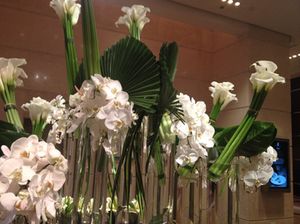 The 1990-vintage ‘Portman’ is undergoing extensive renovations right now but the 610-room hotel coped magnificently. Somehow there was always an ambassadorial type in the lobby, by the daily-changing flower display, to direct you to which of the six elevators was going to come first (elevators are always an issue in any hotel of 45 floors, but the wait did not seem too long this year; perhaps they have re-programmed them). The gym is bigger than it was, thanks to incorporating an adjacent space (this is one of those 24/7 operations that really is used nocturnally, at least by 5.30 am – there are lots of American corporates around). 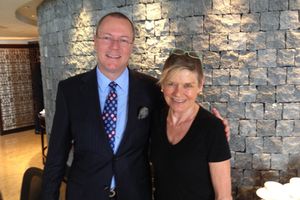 Derek Flint, GM here, arrived back in China only 11 weeks ago – he was in Bejing, earlier. One of the first things he did was go through the ‘usual’ ILTM planning. He resolved to raise the bar on the opening-night ILTM cocktail that the hotel has traditionally hosted, immediately after the opening Forum held in its theatre. He decided to fly in eight chefs from other Ritz-Carltons, and put on a proper multi-station buffet. He installed entertainment spotlights – OK, everyone looked blue, in the photos, but who cares? The result was a memorable opening party. 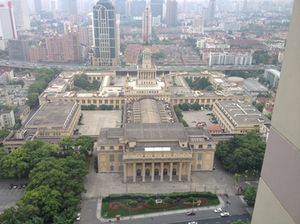 Looking down at the Exhibition Centre

The bedrooms are really comfortable, though no designer would ever have chosen all-over carpeting that is sandalwood background with big off-white flowers and deep maroon leaves. This is the kind of carpet that you dare not drop something on as you might never find it again (it makes the traveller very careful when putting things down). I was in 3314, facing down over the exhibition centre. There it is, looking quite squat from this height.   Fortunately I just cannot see Nanjing Road, between the hotel and the exhibition centre – a road that, here, does have a zebra crossing but you feel you take your life in your hands every time you cross. The secret is not to stop or deviate as you walk. Cars do sometimes stop but taxis, especially, have perfected the art of swerving at the last moment. 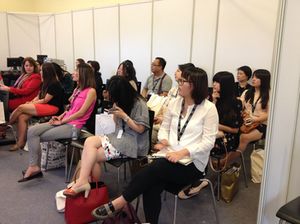 Safely across, I head into the absolutely gorgeous main hall of the centre (first image, above) and look into the media room. Local journalists are eagerly listening to a presentation from yet another luxury hotel group. This is what ILTM is about, networking, and forever learning new things.