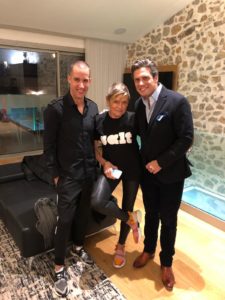 It’s that time again, ILTM Cannes time. Oh My Goodness, with over 5,000 people associated in one way or another with luxury hotels. Those who were not there missed out on the essential annual event in luxury hospitality. From December 3-6, Cannes was ‘taken over’.  You can read the business details on HOT NEWS, here to the right.  But let us look away from transactions.  The parties started on the Sunday night, December 2nd. Swire Hotels’ House Collective held an open house, in a seventh floor rue d’Antibes apartment they had taken for the week: clever move, in the gal’s short time there she ran into lots of GMs, and Nihi Managing Partner James McBride and Remote Lands’ Co-Founder Catherine Heald, who organises all Aman’s private jet tours. 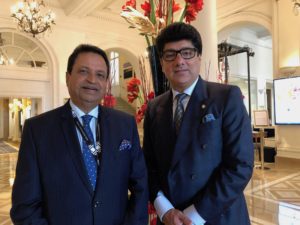 And then came Monday, and Taj CEO Puneet Chhatwal met up with Binod Chaudhary, who had flown in specially from Nepal. Monday was the opening Forum, this year themed for health and wellness. Over 3,000 crammed into the Palais des Festivals theatre to hear speakers who included Six Senses’ Anna Bjurstam and National Geographic Fellow Dan Buettner and we all came away feeling much better. Some then went to the Tout France party, boules included, inside on the Majestic-Barrière beach. Tuesday was the real party day, however: Marriott Luxury Brands took over the Californie restaurant for the week. Jumeirah puts it name on the most elegant of the yachts moored next to the Palais (Como Hotels, and the City of Milan, also had boats). Cheval Blanc, as always, threw a sumptuous cocktail in the most elegant of the Majestic’s suites, and IHG literally transformed La Côte at Carlton InterContinental Cannes – pop-down wood flooring and pop-up walls and Nathan Lump moderating a panel on luxury – at a ‘have a taste of Regent’ dinner. 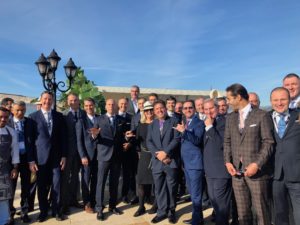 Every day there were breakfasts and lunches as well.  Four Seasons cleverly transformed one rooftop into La Dolce Vita, with the incomparable Vito Mollica from Florence doing his unbeatable risotto. Kempinski cleverly did their own version, with their Berchtesgaden chef Ulrich Heimann cooking live at the rooftop of Five Seas Hotel. Later that day, Nobu, the hotels rather than the chef, threw a colourful beach party and I went on from there to Hyatt’s soirée, at their gorgeous newly-facelifted Martinez – to eat oysters and see every Hyatt GM imaginable. That night, too, the Majestic switched its usual mass-mass party to more elegance, half the guest list, and Leading co-hosted – despite the theatrical staging, everything was back to normal long before dawn. 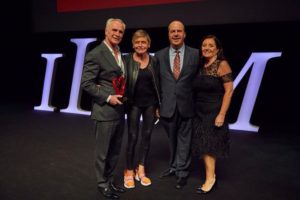 Of course every day the 1,800+ exhibitors, who stayed on their stands, had to present, every 20 minutes, to yet another of the 1,800+ buyers (travel advisors) who got their exercise moving three times an hour. They were kept going, all of them, by the fact that when it was all over, Thursday night, ILTM invited everyone to its usual hours-long party, Taittinger and revolving dance floor, back at the Majestic.  What a long, but also short, three days that seemed from the official start of ILTM 2018, with the Forum, and the presentation of the annual Mary Gostelow Award, this year presented by the 2017 recipient, Virtuoso Chairman/CEO Matthew Upchurch, to Geoffrey Gelardi, The Man Who Made The Lanesborough. NOW SEE LUCA ALLEGRI, MD THE EDEN, ROME, TALKING AT ILTM 2018 ON CHANGING LUXURY TRAVEL NEEDS