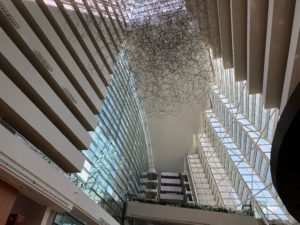 The Retreat wellness corner at ILTM Asia Pacific – see above – was such a success that luxury hoteliers were standing in line to get wellness advice, or a massage from Aman, Banyan Tree, COMO, Ritz-Carlton or Six Senses. Others wanted a posture re-forming from Paris-based osteopath Julien Paccaud. Some preferred to meditate with a Buddhist monk. Honestly, the second ILTM Asia Pacific, at Marina Bay Sands, Singapore, May 27-31, was such a success that, as show director Alison Gilmore said, it ‘sparkled’.  This year there were 560 exhibitors. First-timers included Melia, Minor, Radisson, Resorts World Sentosa, Rwanda, Seabourn Cruises, and Singapore  .Among those who significantly expanded their space were Kempinski, Kerzner, Korea Tourism, Quark Expeditions and XO Private. All exhibitors had computer-generated 15-minute one-to-one meetings with 560 top-flight travel buyers, including, for the first time, advisors from Armenia, Bangladesh, Belarus and Moldova. 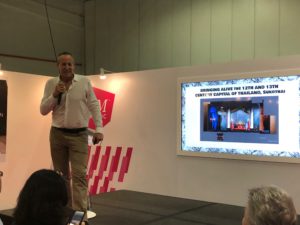 Bill Bensley performs for the media ..

As always, the show had a pre-opening Global Forum. This was held at Ritz-Carlton Millenia, in the ballroom that has interactive LED panels personally designed by hotel GM Peter Mainguy. After an Asia-Pacific economic round up by Dr Parag Khanna, two speakers followed the overall 2019 theme of wellness, Filipina marketing guru Cathy Feliciano-Chon, and Julien Paccaud. Then came, as finale, riveting designer Bill Bensley who, well, as always did his own totally mesmerising thing – at his media presentation two days later he took off his brocade jacket, climbed on and off a box and simultaneously shared tantalising snippets of his current hotel projects. After the Forum came ILTM’s welcome party, literally on Ritz-Carlton Millenia’s outdoor pool (its transparent cover, on-off in four hours from storage to having 850 people on it, is another Mainguy marvel). 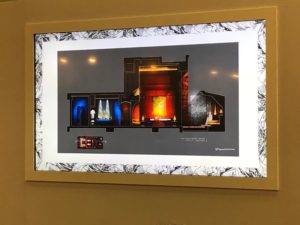 .. and a forthcoming Bensley design

Then followed three days’ intensive business, with buyers moving round to exhibitors’ stands. The whole event culminated in Thursday evening’s final party, up to midnight at Lavo, atop the 57-floor Marina Bay Sands, increasingly known locally as ‘MBS’. This party was sponsored by MBS and I was talking earlier with the boss of the non-gaming side of the operation, Ian Wilson (he oversees 9,000 employees and an increasing number of robots, including ones that fold napkins and hoover floors as they all look after 2,516 bedrooms and dozens and dozens of prime retail and restaurants).  Ian Wilson says that ILTM fits perfectly with his clients: he closed 2018 at 96.7%, average rate S$590 with not even breakfast included. 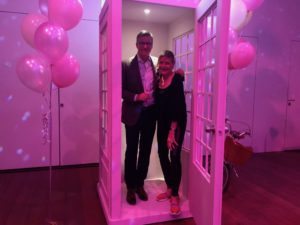 I tried a couple of the MBS restaurants as ILTM lunch breaks gave perfect opportunities for more networking hosted by some of the luxury hotels taking part in the event. One day Four Seasons hosted the 41 global media to Boulud food, and on another Finca Cortesin and Swire took a sizeable share of the rooftop C’Est La Vie for lucky advisors. Tuesday and Wednesday evenings were party time, when events were mostly held away from the ILTM venue. Langham, for instance, turned an impersonal government-type room into a pale pink paradise: Simon Manning wore a pink shirt, his boss Stefan Leser introduced the company’s Celebrate The Everyday promotion, and Bob van den Oord posed in a London telephone box that presumably reminded him of home. Next ILTM Asia Pacific 18-21 May 2020. SEE INSIDE THE RETREAT