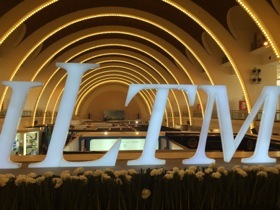 Yes, it was that time of year again. Anyone who was – sorry, IS – anyone in the world of luxury hotels, plus British Airways and Silversea Cruises and other forms of highest-end transport – was in Shanghai for the ninth annual International Luxury Travel Market ILTM Asia. And, says the gal, it was better than ever. Why? Well the unique and iconic Shanghai Exhibition Centre has been cleaned and decorated to an nth degree, with marvellous flower arrangements. How many noticed, by the way, the new Stefano Ricci ‘house’, shop with restaurant above, set in under the arches of the 1955-vintage Soviet-built Exhibition Centre complex? Four Seasons Pudong is catering that new restaurant, which must definitely be on the agenda for ILTM Asia 2016. 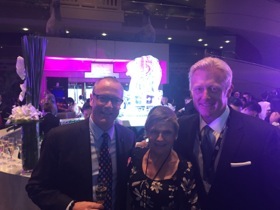 This year’s ILTM was better than ever partly because of expansion of the exhibition area. In all there were 493 exhibitors from 50 countries, and an extremely clever computer matched them for 15-minute one-to-one meetings with 475 hosted buyers (superior travel agents) from 26 countries. Yes, in all over 23,000 meetings were held. Fifteen minutes to talk, then five minutes for the buyers to rush to their next appointment.

But before the speed-dating started, of course there was learning. At the educational sessions, Hurun Report‘s founding chairman Rupert Hoogewerf said that, in 16 years in China, he has never seen such wealth creation as in 2014. 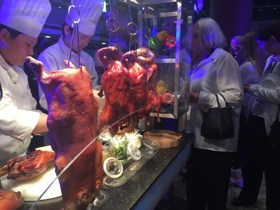 The food at the opening cocktail, hosted by Portman Ritz-Carlton, was absolutely superb

The classroom-type learning was followed by a Forum, when we heard from Shaun Rein, China Market Research Group. New luxury, he says, is no longer a Gucci bag but photographing dolphins swimming, to post on Wechat. And then there was a really generous welcome cocktail, hosted by Derek Flint, one-time psychologist who is now GM of the venerable-and-lovely Portman Ritz-Carlton Shanghai: the educationals and Forum were held at his hotel, as was that opening cocktail. The cocktail is such a good idea because it is an admirable occasion to meet up with old friends from all over, and meet lots of new people (name badges really help!). Hermann Elger, for instance, was making his first ILTM Asia appearance as GM St Regis New York. 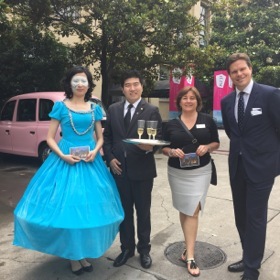 And, a tip. At the 1990-vintage ‘Port-o-man‘, as the locals call this venerable luxury hotel, do reserve a room that gives access to the 43rd floor Club lounge, where Apple and her colleagues make you feel like the most important person in the world. Actually, during ILTM Asia that was where you found ILTM’s big-chief organiser Alison Gilmore and her boss, Nick Pilbeam and most of the rest of the A-listers too.