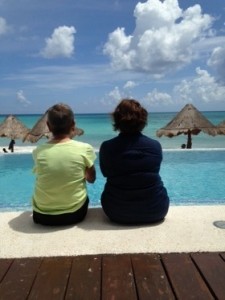 The annual OHL Classic is being played at Mayakoba‘s El Camaleon course, designed by Greg Norman, November 14-17, 2014, but before that Mayakoba hosted another, and global, major event, International Luxury Travel Market, ILTM Americas.

As always, it was hosted at that lovely friendly-luxury resort, Fairmont Mayakoba. Before it started properly the gal was summoned to a meeting in one of the beach villas. Look out, across its private pool, and the beach. Isn’t this the most idyllic place for a high-powered gathering? No wonder this annual event is one of all the participants’ favourites. This year the show, which ran September 22-25th, 2014, attracted 227 exhibitors, from 40 countries. 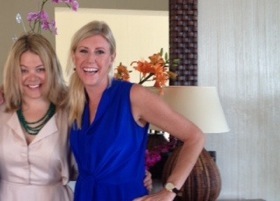 There were also a matching number of 227 hosted buyers, absolutely tip-top travel agents, from 16 countries, plus super-media, crème de la crème. Some quickly became new friends, people of the ilk of National Geographic’s Annie Fitzsimmons, who coincidentally had been baby turtle releasing with me at Belmond Maroma a couple of days before. And, equally magnetic, Michaela Guzy had emerged from the bush, or rather Burn Africa, to tell us all about OTPYM, and if you cannot guess what that stands for it is Oh The People You Meet (see it, it is great). Both of them were on Mario Jobbe’s social media panel before the main Forum. 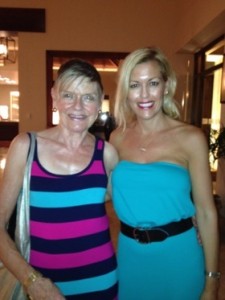 Yes, ILTMs traditionally start with a Forum. Here we had economist Javier Tello Diaz giving guarded praise for Peña Nieto’s Mexico – currently more encouraging than Brazil (although looking at Latin America’s GDP data, 2014 growth figures are led by Colombia, 4.7 percent, and Peru, percent). Claus Sendlinger, who created and set up Design Hotels, described luxury’s five stages and Peninsula‘s Rob Cheng brilliantly said classic does not have to be old-fashioned, as can be seen so well at the gorgeous The Peninsula Paris.

And all the while top social media expert Tiffany Dowd was tweeting away as fast as her elegant fingers would allow (she was then rushing away to join Geoffrey Kent on a private-plane tour taking in Easter Island, and Komodo dragons). 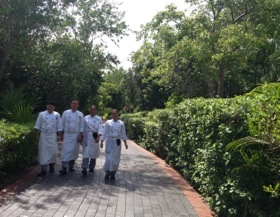 And then came three days of computer-arranged meetings, exhibitor meets buyer for 20 minutes, bell rings, move on, a total of 13,000 one-to-one meetings in all. In between there were marvellous networking breaks, and two memorable evening parties, the first hosted by Fairmont right on the main lawn of the luxury resort. Dozens if not hundreds of chefs and colleagues had transformed the area with a mammoth gazebo canopy, and masses of food stations and a great group, and lots to drink. On the last night, Rosewood hosted. All the time, both at tables and extracurricularly, deals were done and smiles got broader and anyone who cares about luxury travel to the Americas, or from the continent to the rest of the world, should note, now, the date of the next ILTM Americas, September 28 – October 1st, 2015.