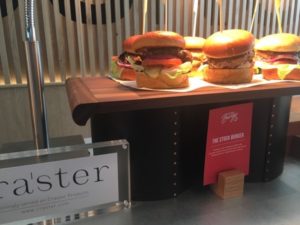 IHG is taking food seriously, very seriously, and the gal expects to see big improvements, at all levels. In its luxury InterContinental brand, there are already several Michelin-starred restaurants, including Theo Randall’s Theo at InterContinental London Park Lane. Theo Randall is also overseeing Theo’s Simple Italian, which has been trialling really successfully at Indigo London Kensington. Another new concept, similarly trialled to phenomenal acclaim at Holiday Inn Brighton Seafront, is Stock Burger: this comes with choice of four fillings and TripAdvisor reviews often say these are the best burgers in Brighton, which really means something in this foodie and avant-garde English town. Here at the IHG European Conference 2017 in Berlin, food from both these fun-eating ideas were served at the dine-around lunches each day. 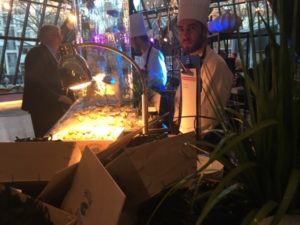 Monday night, there was a dine-around in the entire ground floor of InterContinental Berlin, the host hotel. RIght in the middle of the lobby an oyster bar was set up and dozens of servers were alertly going round with trays of easy-eat foods, while colleagues carried trays to cart away empty dishes – and glasses, because, as with any hospitality gathering worth its culinary salt, there was plenty of good wine, and beer. It was all so carefully thought out. Wednesday night, the hotel would be catering the final gala, a seated meal in the ballroom. For variety, and to give the hotel staff a break, Tuesday night was dining off-site, at the Bolle Festsaal. What a fascinating venue, named for Carl Bolle, a milk supplier who in the early 1880s had up to 60 bolle-wagon horse-drawn coaches selling fresh milk to locals. 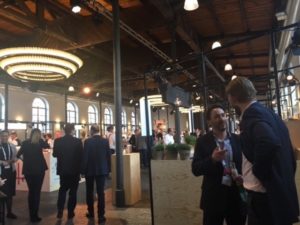 In 1886 he bought this site, the former Schumann porcelain factory, and he set up a school for his employees’ children. He also established two chapels, first one that seated 650 and then one for 1,600 persons – there was also a lending library, and a cinema. Somehow it was such a suitable venue for a dinner for this heritage-rich hotel company: IHG’s luxury brand, InterContinental Hotels & Resorts, can be traced back to The Grande Hotel, Belem, which operated as InterContinental from 1949 to 1966, although many would say the first was the Tequendama in Bogota, which had been signed December 1948. Anyway, tonight, Tuesday, halfway through this brilliant IHG Europe Conference 2017, 599 of the 600 delegates had an absolute culinary feast, enlivened with wines and freeflow Laurent-Perrier, here at Bolle Festsaal. 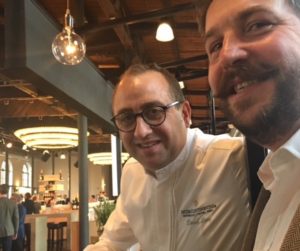