One smiles as one enter's Iggy's, in Singapore

Many years ago, at the then-The Oriental Singapore, the gal was introduced to a reed-slim young would-be sommelier Ignatius Chan and his good buddy, the miniscule would-be chef, Justin Quek.

Both were to some extent mentored by a French food guy, whose name has somehow faded into the Memories of the Last Century (his first name began with an F).  He took the two youngsters to Reims to learn more about Champagne, and he toured great French restaurants with them.

A few years on and Ignatius Chan had won every sommelier competition in the global book.  He became the powerful wine man at Raffles and then both he and Justin left the hotel world to help set up, with two Singaporean wine lovers who had pretty deep pockets, Les Amis restaurant group. 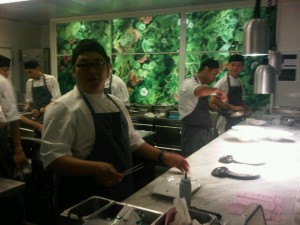 A wall in Iggy's kitchen looks like a garden

Justin Quek went on to be his own boss, of restaurants around Asia.  Ignatius and his wife, Janice Wong, set up Iggy’s.  Sadly neither was on hand that memorable lunch day in Singapore (the gal’s first day back in town after her Australia sortie).  One gathers that Mr Chan has, however, moved on from his unassuming size-zero looks to become an international man of stature.

The new Iggy’s restaurant is a temple to culinary arts.  You enter what seems like a black-walled theatre mystery show.  Turn left, and you come to a bar counter with six seats. Turn right at this point and if you are similarly privileged, you will be shown into the gorgeous kitchen, with one entire wall of a photographic ‘rainforest’.  The designer of all this is Chris Lee of something called Asylum Creative. 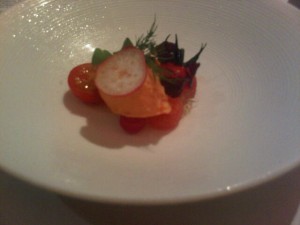 Iggy’s top chefs are double-As, Ansari Abdullah and Akmal Anuar (his dessert guy is allowed another family name, he is Andy Lara).  Every single one of the 28 seats – yes, only 28 seats in a dining complex, also known as a theatre mystery show that cost double-digit millions – is of course taken.

Christina Ong, founder of Como Hotels and Resorts, is lunching with a girlfriend in one corner.  Everyone is, methinks, local.  Foreigners simply would not have the style to seek this place out.

The lunchtime vegetarian menu, a set S$85 price with four courses, offers such delicacies as Alba white truffles with linguine and a house salad.  First comes an amuse, of honestly the tiniest, caught-before-birth tomatoes the gal has ever seen. 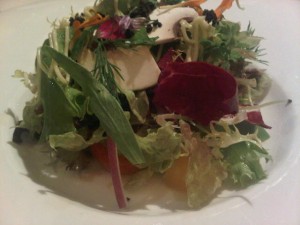 They are pea sized, and that is petit pois and not old-style pea sized.   The salad, wow, has mesclun leaves, with avocado and mango cubes and a balsamic dressing.

The amazing thing is that Iggy’s is on the third floor of the Singapore Hilton.  Now what is also amazing is that this hotel is 1969 vintage, and boy it does look it from outside. 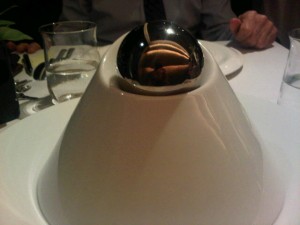 Ignatius Chan personally designed this pasta cover. Remove the silver ball and lean over to get maximum aroma of the truffles within

But its location is one of the best in town, right on Orchard Road, and its staff, led by the stylish Alain Mahillon – here since 1992 and still going more than strong – are absolutely outstanding.  (The AM maxim includes putting yourself in the minds of the customers, what would THEY want, what does THAT girl use among the bathroom supplies, and should I replace it?).

The hotel is not only ahead of its time in putting the theatre that is Iggy’s as a separate unit, performing in the great arena of a 24-floor hotel, but all 422 bedrooms have now been brilliantly upgraded. 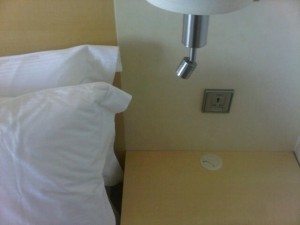 Thanks to Hilton’s own design team, and Grace Soh of Bent Severin, these are now some of the most user-friendly bedrooms in the business.  Lightwood, light colours, high-set bedside lights with fibre optics below, masses of storage space and wood desks replaced by big glass tables – and, thankfully, light switches that are easily seen (they have lighted bands around them), and identified.

Every other luxury hotel take note that anything that saves time to a busy girlahead is to be commended – particularly when it gives more time for shopping. Singapore Hilton’s arcade includes Dolce & Gabbana, Marc Jacobs, Mulberry and every brand you can think of – plus Christina Ong’s own Club 21.