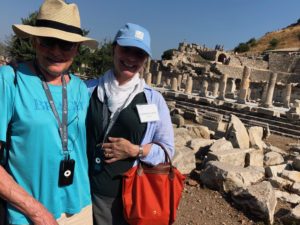 Watch Ponant – it seems as if the French might be taking over the world, and not only in Champagne terms (though the bubbly was certainly out this week as it has just been announced that Ponant is taking over Paul Gauguin Cruises).  Anyway, the last port of call on Ponant’s Le Lyrial’s sensational cruise, Treasures of the Mediterranean World: a Family Learning Adventure was Kusadasi for Ephesus. As well as Greek and Roman ruins this site has many Christian connotations – it is one of the seven Churches of Asia mentioned in the Book of Revelation and the Gospel of St John may have been written here. As always, the ship’s wonderful onboard archaeologist, Dr Kathleen Lynch, was not able to be our onsite tour guide as the ‘official’ tour guides would get, well, upset, but those in the know made sure at every stop that being near Kathleen meant we could ask her discreet questions. Interestingly, she started out in medical school but was lured to archaeology. She heads the Classics Department at the University of Cincinnati. Sadly, I forgot to ask her about ancient Greek depictions of butterflies (her husband is a butterfly scientist). At one of her onboard talks she showed how many ancient symbols are used as logos by today’s companies. The lyre of Apollo is motif for our Steinway piano here. Tripadvisor uses Athena’s owl of wisdom. 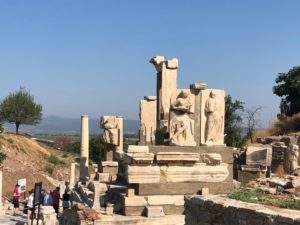 Athena, also referred to as Athene, is goddess of wisdom, courage, inspiration, civilization, law and justice, strategic warfare, mathematics, strength, strategy, the arts, crafts, and skill. I personally learnt so much, from the onboard talks and every day on land tours. At Ephesus, for instance, the river Meander twisted and turned, which led to the word meander. The original marble-slab roadways, most of them quite steeply sloped, are still extant, and they are incredibly slippery.  Walk down and you pass obviously-needed signs with telephone numbers for emergency medical help.  Many of the statues along the way are in remarkably good condition. Scratches on rocks show an ancient shopping list, including hazelnuts, small figs, barley, onions, and caraway. 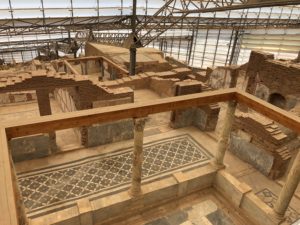 ..and inside the Ephesus house ‘tent’

And then you come to a giant tent, covering some 4,000 sq m. Supervised by Austrian archaeologists, this protects ruins of three-floor houses literally built into the mountain side – names of sponsors include the hotel conglomerate Dogus paying for renovation of room 12.  The end of our day was a most informative presentation in Kusadasi bazaar by a family-owned carpet company, Heirloom (the boss shows off some wares, above). It was fascinating to watch how silk direct from the cocoon is spun and dyed – see a video below.  I had seen many demonstrations of carpet knotting elsewhere but what took my breath away was the beauty of some of the finished carpets, especially those that had at least some silk (there were also carpets with bamboo fibres). 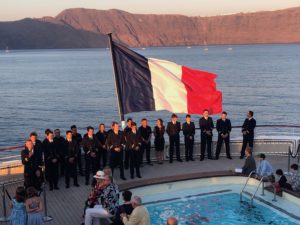 The penultimate night on board this luxury Ponant cruise was the industry-standard ‘Captain’s farewell’, where typically the Captain introduces a selection of all the staff, and passengers thank and cheer them.  Usually this takes place inside, in a ship’s theatre, but here it was purposely held outside, at sunset. See a video below. The Veuve Clicquot toasts were genuine, and judging by the appointments with the onboard directors many passengers have already booked for more: Ponant has a partnership with the Louvre and I would be particularly excited by the ten-day trip, on Le Lyrial, Cultural Jewels of the Adriatic, Athens to Venice, from August 14, 2020 – by 2021, by the way, the Ponant fleet will have doubled in size, to 12 ships.  But now it was time, in Piraeus for Athens, to disembark. For the first time in my cruise experience Captain Christophe Colaris was at the top of the 26-step ‘gangplank’ personally to thank and say goodbye to everyone. Passengers then had a full day of Acropolis and Agora archaeology. Since Kathleen Lynch is Vice Chairman of the Managing Committee of the American School of Classical Studies in Athens, she was still working, finally being able to lead one of the groups.  Then, after a Greek taverna dinner, it was overnight in a Leading hotel and, on the morrow, escort right to the airport.  Seamless service, start to finish. AND NOW, VIDEOS OF TOURING HOUSES UNDER ARCHAEOLOGICAL CAFE AT EPHESUS, SILK-SPINNING IN KUSADASI, AND THE CAPTAIN’S FAREWELL ONBOARD PONANT’S LE LYRIAL