The perfect Sunday in downtown São Paulo starts with a wakeup in the fabulous Emiliano hotel in the Jardins area. Look across Oscar Freire street and you will see, from 0800 on, a constant buzz of activity at Santo Grão, the coffee-shop-becomes-a-community that is the gathering place for the fashionistas of the high-octane locale.

This place does not take reservations, it is first come, first served.  You might find yourself sitting next to a Patsy from the Ab Fab television series, all dark glasses and all, having her coffee while three miniature poodles are tied to her table leg.  The gal is fascinated.

Santo Grão, of which there are now six in town, are real-life communities, the equivalent of the best English pubs.  All ages come wearing anything from pyjamas and a flowery baseball cap to the latest Hermès whathaveyou.

The male servers wear full-length black aprons.  The girls wear bright orange aprons, which match the careful calligraphy (done by Frenchman Jean-Jacques Sendra) on blackboards behind the main bar where baristas hold court – later they will be mixing Caipirinhas. 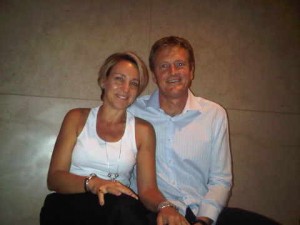 Santo Grão is the brainchild of New Zealander Marco Kerkmeester and his wife Renata, who is Brazilian, and blonde and gorgeous.  They met sitting next to each other on a plane that was delayed two hours.

He was working for IBM and fed up, she was importing bath fittings and ready for a change.What did they want for themselves, first and foremost? A decent cup of coffee, but more.

Hence this lifestyle, the luxury of interaction with people you may well know but also others who are new to you but want to share a few minutes of their life rather than drinking a cup of coffee back home, alone.  Have a fresh smoothie, eggs Benedict and your coffee, fuel yourself up. 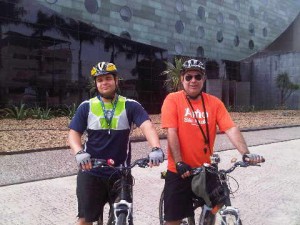 Lincoln Paiva, in orange, and his son Gabriel

Across town Lincoln and Gabriel Paiva are already waiting.  Lincoln heads Green Mobility Brazil, promoting ethical transport as well as getting to know more about one’s locale.  His son Gabriel is a medical student.   They are ready, with bikes, at Hotel Unique.

Can we manage two hours’ cycling with them?  On Sunday, this is no problem.  The streets are near empty.

We pedal through the European Gardens area of town, lush with amazing mature trees planted down either side of streets that are flanked by homes of the prosperous (Jardins is tall apartment blocks, here are individual homes). 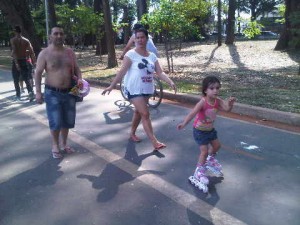 There is a massive lake, and giant, hundreds of years old trees somehow brought from India. And there are people, of all ages.

If greater São Paulo has 22 million inhabitants, it seems as if five per cent of them are here, biking, blading, walking, running, talking, having lovers’ tiffs and/or family picnics. 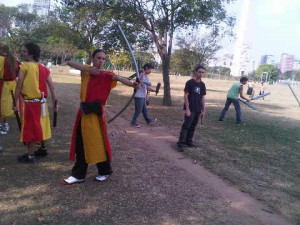 Some are playing at Middle Ages jousting and games of non-war.  You can buy coconut water and mineral water and somewhere there must be restaurants – Brazilians do not know how to fast, even for a few hours.

We stop continually, simply to admire what is going on around.   Here there is a full-size replica of a typical Japanese ryokan, with its garden.

There is a flat, flying saucer-shaped museum showing treasures of the Vatican, and the city’s official nursery, growing trees and shrubs to beautify the city even further.

A small boy sees a coconut, thinks it is a football, kicks it and howls with pain. 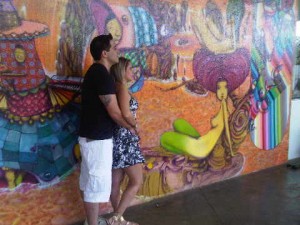 Couples are photographed in front of a pretty sexy mural …

We talk about where else we have seen them, notably in Bilbao, Doha and Ottawa – six bronzes were made, in all.

She was inspired by the strength of women (the spider’s legs), and because, as a child, she had seen her father have an affair with her tutor when her mother was sick. 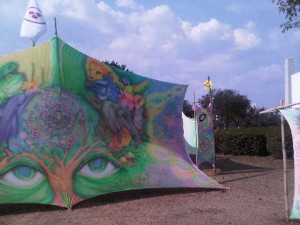 ..and campaigners spread their message via a painted tent and banners

Next to Maman is a hilarious mural, the kind Brazilians do so well (they are masters of graffiti). A professional photographer is there to snap you in front of sexy scenes.

Nearby, some religious group or other is promoting itself with a painted tent strung up from trees, with painted fabric posters similarly hung around.

Inspiration comes from the permanent artworks, which include one of the greatest Niemeyer designs of all time.  Now Brazil’s greatest living architect, Oscar Niemeyer, is, despite some online comments to the contrary, still alive, and working at 104. 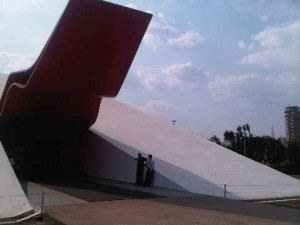 The Niemeyer Auditorium is a white shape, with a scarlet door one end and, at the other, a scarlet lip over the main entrance

Niemeyer is more ageless than the fashionistas…. here, his Auditorium is stark white.  One end has a big scarlet door.  The other end has a recessed door, over which hangs a scarlet lip. Jards Macalé plays here on September 15th, 2012.

And finally, having survived two hours without actually hitting or running into any of the Paulistas in the Park, we go for a typical Paulista Sunday evening.

Showered and in casual gear, we head for pizzas.  Just as we started, hours ago, it is no-reservation, first come, first served. 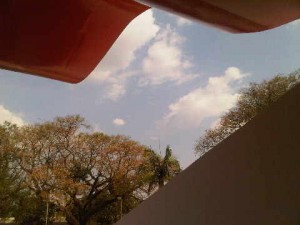 Looking out at the real world from Niemeyer’s Auditorium

We head for Girarrosto, where the antipasti include fresh goat’s cheese, and parma ham papers, and marinated mushrooms and eggplant.  The pizza comes on a big circular tray with a silver lid that exactly fits.

Underneath, the pizza is composed in eighths, one section with artichoke alternating with one without. We munch over oodles of conversation, hardly noticing the service is so erratic I cannot believe I am still in São Paulo, the City of Service.  But then there is an exception to every rule, in every luxury lifestyle.