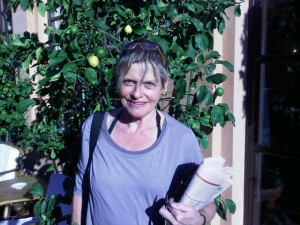 Off to breakfast at Hotel Splendido, past a fruit-ful lemon tree

Breakfast for a healthy sexy girl is the most important meal of the day – and eating on the outside terrace of star-filled Hotel Splendido Portofino, Italy,  just fits the bill.

This, under an hour’s drive from Genoa, is where, after all, Madonna famously celebrated her 50th birthday.  Did she, too, begin the following day with this amazing breakfast spread?

Inside, in an elegant, chandeliered room with some walls frescoed with typical local scenes, a long L-shaped table holds dozens and dozens of green and white majolica dishes. Want fruit, whole or portioned? 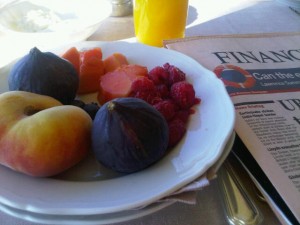 I went for whole figs and flat peaches, and papaya chunks and blueberries.  The yoghurts were plain and fruit, offered alongside tapioca and a variety of curds. The cheeses were beyond belief, as were the cold cuts.  I went for a tasting of buffalo mozzarella, small one-bite, bit of big one and bit of an amazing smoked one.

I could have asked for à la carte hot, but stuck to the breads (three types of focaccia and ten-out-of-ten croissants and so on). The preserves were Confettura di Lamponi (Italian), Crabtree & Evelyn organic (English) and A l’Ancienne (French): the china of course was Italian, the one and only Richard Ginori.

The waiters, all guys and they looked straight from the Milan catwalks, wore pale stone-coloured formal jackets and black trousers. The newspapers were aimed at intelligent readers, the Financial Times (pink) and International Herald Tribune (white). 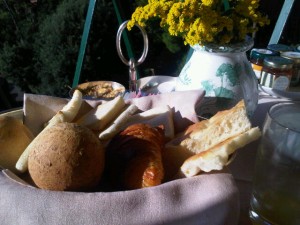 Oh boy, I have forgotten the bright yellow juice, that matched the mimosa on the pink-linen-covered table. I was right at the edge of the outside terrace, looking down about 300 yards vertically to the plebeian life below. The slopes are a variety of greens, the water down there is blue, as is the sky above.

This is a discreet riot of colour, here above Portofino. In the last few months, Heidi Klum’s charismatic husband Seal (whom I met at the opening of Mardan Palace in Antalya) has been here, as has forever-young Rod Stewart.

I must say I feel younger than ever. As dawn broke, I pushed open the pine-green wood shutters at the two French windows of room 228 at Hotel Splendido, the luxury hotel of stars from a hundred years back: when Groucho Marx left, he wrote in the hotel’s VIP Gold Book: ‘wonderful hotel, wonderful people, I deeply regret leaving’. 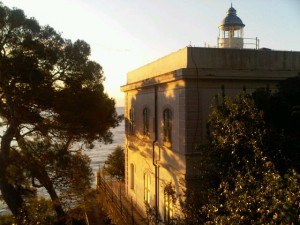 Today, in this Leading Hotel of the World (owned and operated by Orient-Express) I looked far down to the harbour, and across to the high-hill pine-covered promontory through which the tops of Castello Brown and a couple of Large Private Mansions protrude.

I did a quick run, down 192 steps through the hotel’s immaculate gardens, turn right along to Portfino and up past Castello Brown to the lighthouse. On the way back I passed the Ava Gardner Suite at Hotel Splendido Mare (sibling to Hotel Splendido) – where I too stayed, on my last visit to this enchanting village. And gosh, is it better out of high season.  Best time to visit is definitely April-May and September-October, any year, either hotel.