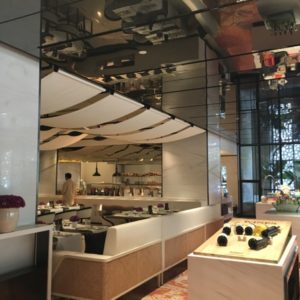 Mumbai’s Gateway of India, built to commemorate the 1911 visit of King George V and Queen Mary, is India’s equivalent of the Statue of Liberty, Big Ben or the Eiffel Tower, namely an iconic man-made structure that is logo of a nation. Equally iconic is Taj Mahal Palace and Tower, actually eight years older – it was begun, says the gal, in 1903. But, unlike some of its contemporaries elsewhere in the world, this is a luxury hotel that continuously keeps itself up to date. Latest upgrade is a new, 24/7 Shamiana restaurant, removed from its former somewhat dark space, to a divinely airy room and terrace directly off the main lobby. 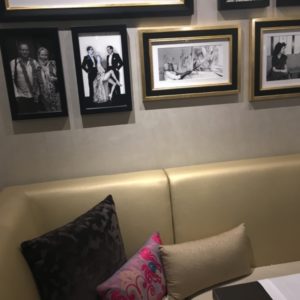 There are fascinating photos of previous guests…

The Rockwell design includes dozens of black and white photos of former guests. The restaurant’s indoor and outdoor seating, holding 164 at any one time, sees an additional 200 customers now, including fashionistas and young foodies and those attracted by a display of cookbooks. Others come for the menu, which has deliberately been tweaked, says hotel GM Taljinder Singh, to make it even better value for all ages: the maximum price of a main course is now $12 (what, I wondered, will happen to the old Shamiana space, will it become a gorgeous spa?). 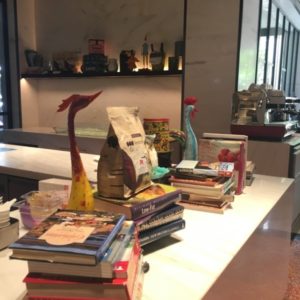 .. and cookbooks in case you are bored

This 565-room hotel has a plethora of popular restaurants, including Golden Dragon for Chinese, which includes a great Sunday dim sum brunch, Masala Kraft for Indian and Wasabi by Morimoto for Japanese. I think my favourite for lunch, however, is Souk, atop the 20th floor Tower of this massive building, and that is where we ate, sampling its excellent mezze appetizer buffet before going on to chef Simon Chakour’s main courses – this is a man who knows how to do fish exactly as requested, namely not a second overdone. 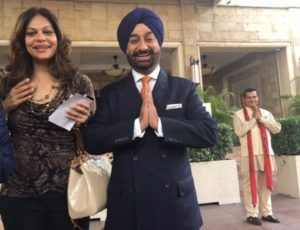 Farewell from my friends Rakhee Lalvani, Taljinder Singh – and the concierge in his new uniform

I heard about Tajness, trialled in this luxury hotel before being rolled out company-wide. This includes suitable welcomes – like the drums and dancing I had in Guwahati – and local specialities at afternoon, or high, tea as well as breakfast. Every hotel will have a sunset lighting ceremony, recreating the lighting of candles that is traditionally done in Indian homes. In addition, generic uniforms, say for concierges, are being replaced by bespoke creations that typify local elements: here, the new uniforms are by Payal Jain, and feature, as shown on the right, golden tunic-type pyjamas and deep crimson stoles. See what I mean about this hotel constantly being up to today, and tomorrow? NOW SEE MY VIDEO OF SOUK, BELOW