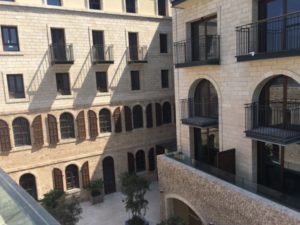 Jaffa, to the south of Tel Aviv’s Charles Clore Park, is steeped in history. It is associated with biblical stories of Saint Peter, and Jonah and Solomon, and with the myth of Andromeda and Perseus. Its port has been used for millennia, and exactly a hundred years ago, in 1917, British and Australian troops commanded by General Allenby defeated the Ottomans here, and Jaffa became part of the Palestine Mandate. Today, Jaffa is a major tourist destination, with super restaurants and shops and, as of January 2018, what promises to be one of Tel Aviv’s most fascinating luxury hotels, The Setai Tel Aviv. The gal was lucky enough to have a walk-through. 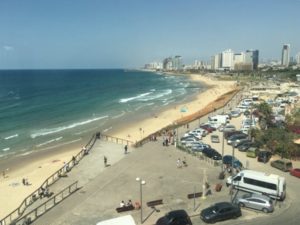 View along the beach

The building itself goes back, in part, to the 13th century (see what will be a restaurant, above). A late 19th century building that later housed the Mandate governor, and then became a police station, is highly protected and even bars on its windows cannot be removed – rooms in a new building, seen to the right of the photo upper left, have no bars. In all there will be 150 rooms, in a variety of shapes and sizes, leading up to a stunning ARA-designed Presidential Suite, 1,200 sq ft in all, and all-wall windows giving spectacular views both out to sea and north along Charles Clore Park and the beach. 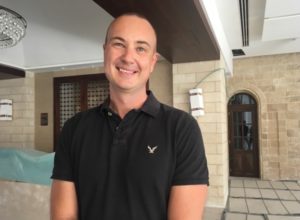 The Naccache family, of jeans fame, co-own The Setai in Miami Beach with the von Furstenberg family. The Naccaches, alone, bought the historic complex here over ten years ago and the concept has been turning into reality ever since (this June they opened a smaller Setai, with 110 rooms, at the Sea of Galilee). But Jaffa is now nearly finished, and show rooms reveal remarkable similarity to the Miami original, which will be appreciated by all that hotel’s many followers. Here, the 65 ft pool is rooftop, reached via 24 stone steps from a patio: just as in Miami, the pool will be an A-List gathering place. Also like Miami, this hotel will be Leading. The GM and his 150 staff are already hard at work. Bruno de Schuyter is Belgian but he has been in Israel for many years and he is immersed in the country’s hospitality culture, ready for the challenges awaiting his hotel.

Setai fans are going to expect the world’s best service, and somehow that has to be achieved within the framework I 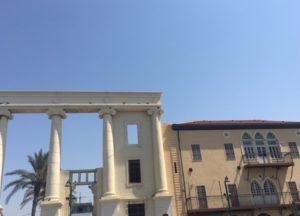 continually hear about – a 3.3% unemployment rate, competition from high-tech startups, and ex-military conscripts longing to travel the world after they have worked six months, say in a hotel, to get a government bonus. Bruno de Schuyter knows all this, and he is sending some staff to train in Miami, and bringing Miami long-timers here for a spell (as a Leading Hotel of the World he cannot make mistakes, he says). He also knows this luxury hotel has a major advantage, not only in his product but its environs. Walk down 11 steps from Reception and you are out in Clock Tower Square, with its hubbub of activity, and antique columns, and old buildings, and the Clock Tower itself: this is one of seven built in Palestine during the late Ottoman period, started 1900 to commemorate the silver jubilee of Ottoman Sultan Abd al-Hamid II. Immediately next door to the hotel, by the way  is a mosque, whose muezzin’s call resonates at set hours. Walk a few more yards and you overlook the beach. Sadly, I had to leave all this fascinations – SEE A VIDEO, BELOW, OF MY SUBSEQUENT BEACH WALK