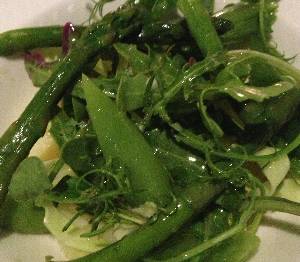 If you want to create a stir, name a dish Abalimi Bezekhaya – as Carl Heinz Habel, the manager of Planet Restaurant says, every first-timer here asks ‘what IS that?’.   Some think it is a Romanian village, other a kind of hip-hop in a Brazilian favela.

Who would ever associate it with a salad served in the main evening restaurant of Cape Town’s iconic luxury hotel, the Mount Nelson – known variously as the pink lady or merely ‘the Nellie’.

The gal wanted to see what has been going on in the 18 months since she was last here.  After all, even with an eternally young lady ‘born’ in 1899, a lot of anti-ageing is required, and the Planet is a good example. 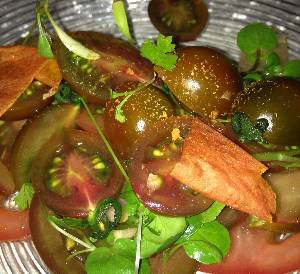 This used to be the Colony Restaurant and very boring it was too.  Now the hall – not a room, but a hall, with 20-foot columns – has been transformed, with lots of blue and white baubles and planet projections on to the carpet and menu covers infused with what looks like stardust.

The food has been transformed too.  The head chef here, Rudi Liebenberg, believes in organic, and local.  Abalimi Bezekhaya is named for the urban agriculture and environmental initiative in local townships, making it possible for the tiniest-time farmers to produce, naturally, just a few perfect organic vegetables (Abalimi means ‘planters’ in Xhosa). 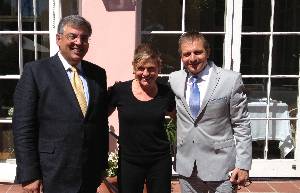 This means that Planet’s menu also includes an heirloom tomato salad, with the tastiest baby blacks imaginable.  Go on to something substantial, say springbok, or a beef ribeye with tiny mouthfuls of fondant potato and cauliflower, and though the protein does not come from the townships, it is also local.

Talking of local, the Nelly works so well with Cape Town artists.  Orient-Express owns and runs this place, and Orient-Express’ Man in Africa, Sandro Fabris, has invited a local art college to do lithographs for all the public areas.

He is full of creativity, this Italian.  It is he who replaced the tent ‘flaps’ in Orient-Express’ luxury safari lodges in the Okavango Delta by proper glass walls with French doors inserted. 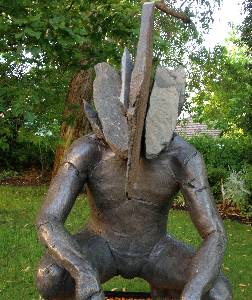 It is he who took photos of massive ceiling lampshades in a hotel in Dubai and had them copied, here in Cape Town, to hang in the Oasis breakfast restaurant – yes, another superb Cape Town breakfast place, and at this one you can also sit overlooking water, in the form of the oval swimming pool (one of two, the other is an adults-only lap pool).

It is Sandro Fabris, too, who has come up with the brilliant idea of inviting art gallery Everard Read to display massive bronze sculptures in the grounds (they are illuminated at night by small solar panels).  The sculptures are all named.

There is what I call Ganesh, in fact it is an elephant-man called SIT by Angus Taylor, whose works I have seen before, and who is pretty well represented in the display here.  It is win-win.  The hotel gets an art show, the artists get exposure and, who knows, guests might even buy a little Ganesh to take home. 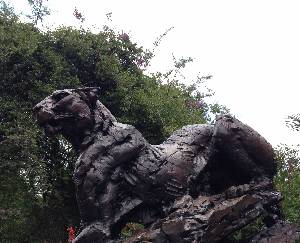 My favourite, here, is Leopard Lying on the Rocks by Dylan Lewis.  This is an old friend.  Only three days ago, as I passed through Johannesburg, I saw another of this sculpture, in the Everard Read main gallery in Johannesburg.  This one, here at the Nelly, is number 3/8.

It reminds me of the leopard I saw at Khwai River Lodge, and of my own attempts to pose like a leopard.  I wander through yet more of the gardens here (there are acres of them, all beautifully tended) and see Dylan Lewis’ Cheetah, near the main swimming pool. 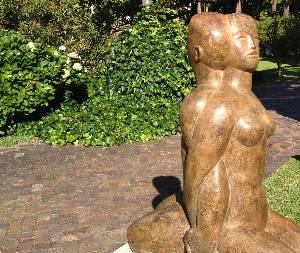 Some ducks, real not bronze sculptures, are wandering around, doing from the rear what ducks sadly tend to do – unlike elephants, ducks’ output is little use to the rest of the animal world.

There are some other names represented.  Florian Wozniak’s Couple shows, well, two intertwined people.  Nearby is a seated woman leaning forward (Naledi, by Egon Tania).

Come to think of it there are also some spectacular natural sculptures, like century-old palm trees that have been exactly groomed ever since they were planted for a visit by the then-Prince of Wales in 1924. 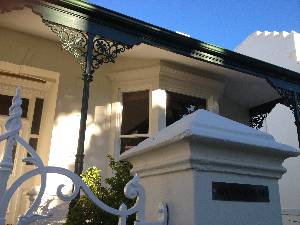 The 24-hour gym is now an antique house

Think of the best male grooming concerned, say, in London, Geo F. Trumper, barber since 1875. In New York, some try Prestige Barber Shop.   Ask one of the world’s most discerning personalities, M.P.S. Puri, and he heads to Hong Kong to get a pedicure, Shanghai-style at Mandarin Oriental Hong Kong.

For a manicure, he tries to be in Dubai, at 1817 in The Boulevard (right now he is, coincidentally, just about to arrive here in Cape Town, at the Mount Nelson). Yes, it is a small world, and the more you know, the more you know that.  There is a new Christofle shop at the Nelly, and lots of newly-decorated rooms.  The gym has moved. It now occupies one of the century-old townhouses that form part of the grand complex that makes the hotel – the gym, of course, is 24 hours, and the new equipment is Technogym.  For me, running outside is also a delight. 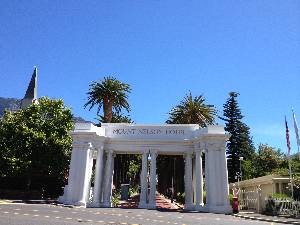 Running back up to the Mount Nelson's iconic entrance arch

I head down the brick-paved main drive and through the ceremonial white arched gateway and head down the pedestrianised Government Avenue, nearly half a mile down to St George’s Cathedral, and back again. You need all the exercise you can get here, because the food is so good.  Check the rear lobby of the hotel every afternoon and it is choc-a-bloc with afternoon tea partakers.  Encouraged by a live pianist, the speed of the devouring of scones, sandwiches and lemon cheesecake is Olympic. 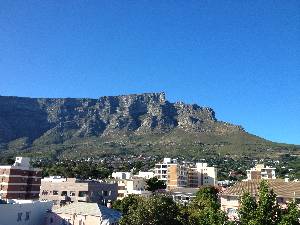 View of Table Mountain from room 414

But some things never change. There are 286 rooms in all, 134 of which are in the main, four-floor building.  I was taken up, on arrival, in a vintage elevator with black and white checked floor, and Edwardian veneer.  Up at room 414, a haven of softest eau-de-nil, I looked out at Table Mountain, the icon that makes you feel at home, here in Cape Town at the Mount Nelson.