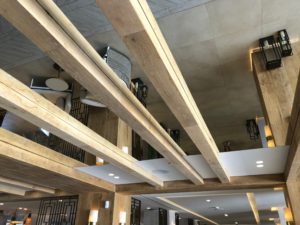 Looking up in the lobby

It was a brilliant stroke of genius for two Mediterranean-based hotel companies, L&R and MC Hotels, to join together to take over the old Ibiza Bay hotel.  Since you are not allowed to replace or build anew close to the coast on Ibiza, the two owners then spent three years converting the original three-floor, W-shape structure to what is now the stunning Nobu Ibiza Bay (as Smart Flyer owner Michael Holtz said to the gal in the airport lounge on departure, ‘this is a really great hotel, for all ages, and you can quote me’). Designers Jennica Arazi and Marios Nicolaou  have done a splendid job, just right for Mediterranean luxury. The whole thing feels right as soon as you arrive: walk through the 152-room hotel’s lobby, a haven of living walls plus bleached wood and mirrors, and look through to one of the two significant pools, with the beach and Mediterranean beyond. 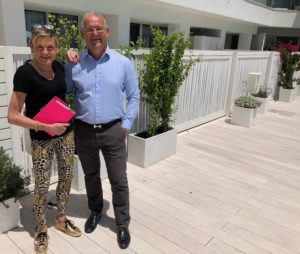 I was met straightaway by GM Alberto Muñoz and taken to lunch by two of his colleagues, Javier Saavedra and Andrea Cerosio, who both oozed passion for the resort.  Although it is only, in its new guise, one year this very month, and it is seasonal, May through October, the first weekend of its 2018 operation saw 95% occupancy and now it looks like running at close on 100% all season long.  As Michael Holtz so rightly said, it is perfect for families (the kids’ club has a great screening room), and for honeymooners, and fashionistas (wow, check out the hotel-run boutique) and mature sun-seekers who are perfectly happy whiling hours away on one of the dozens and dozens of single or double sand-set loungers around the pools. 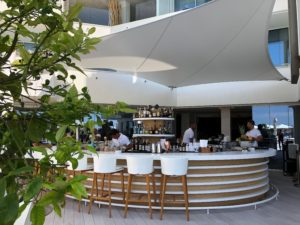 Life at Nobu Ibiza Bay is mostly outside…

And foodies are in heaven. Of course there is a Nobu restaurant – the great man was back here again last week – and there is a new-look Mexican, and the all-day chiringuito beach restaurant, Chambao. This last choice has a world-class buffet breakfast and, at lunch a Cinco Jotas Jabugo 1879 ham cart, named for the ham specialists owned by five brothers, is manned by a specialist with sharp knife and tweezers who then presents you with a beautiful plate of wafer thin jamón, acorn fed and air-dried for about four years (this followed pica pica, tiny bites that included cheese-speckled artichoke hearts, and seabass ceviche).  All three restaurants, by the way, are indoor-outdoor, with some tables on decking, some right in the sand, and Chambao has one ultra-discreet sand-set private dining table for parties of up to ten.  Yes, this is outdoor living. 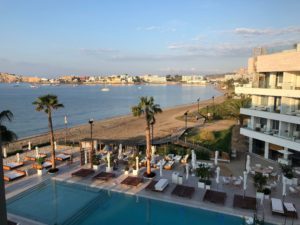 Looking down from 330, early morning

You can even have your Six Senses Spa massage outside, in a private curtained-off cabana – I had an hour-long ‘Bhutan’ tai chi lesson with Mario, outside on a deck, and no-one seemed to pry.  I used a Pilates ball outside on the balcony of the gym which, without my having to ask, was open specially early for me: inside, I watched TED presenters and played Sudoku on the latest Technogym runners.   Oh there is so much to encourage you to stay on and on at this luxury hotel (John Frieda has the hair salon, with a separate street-set entrance which brings a lot of outside business).  I would, if I had more time, spend a lot of it in room 330, apparently among the smallest in the house but, for one, it was just fine.  I loved the Pikolin bed, with its Oliver linens and a bright Cerulean-blue throw.  I had an AudioPro – Roberts-like – radio, an easy-work DeLonghi coffee maker, Natura Bissé toiletries and a heated towel rail.  And, like all rooms, I had a Mediterranean-view balcony with seating – for those who want even more, some of the suites have rooftop plunge pools. AND NOW SEE VIDEOS OF THE BEACH, AND ROOM 330