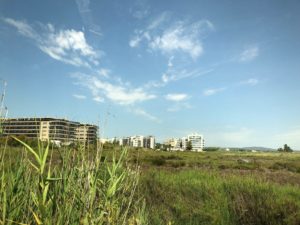 Five minutes from the airport…

Having looked at two of its hotels, both under a year old in their present guise, it is time to consider Ibiza as a total destination.  The island is 571.6 sq km and has a population of about 150,000 and yet in 2017 it had three million visitors, up 57% on 2016 says the Balearic Statistics Institute IBESTAT.  Top of the visitor nations is UK, clocking in at 871,288 – more than the combined total from France, Germany and Italy, and obviously not all are looking for luxury hotels. Some head straight for the main party areas of San Antonio, on the west coast, and, on the east coach, Playa d’en Bossa. Fortunately those who just want the pure simplicity of, say, a burger on a Nobu balcony – as above – need never come into contact with the party crowd. 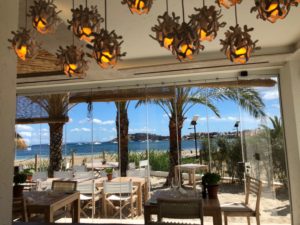 Nobu Ibiza Bay is right on the water

The airport, both on arrival and departure, is an eye-opener. Whoever thought there would be direct flights from Newcastle UK and, during high season, apparently there are charters from four US destinations – and yes, US visitor numbers are up, fuelled to some extent by a desire to visit the home of the Balearic Beat.  Short-stay visitors, by the way, can have an unpleasant shock finding out how long it takes, on arrival, to get to a particular hotel: Nobu Ibiza Bay has the big advantage of being only ten minutes’ drive away, with lovely pampas views enroute. 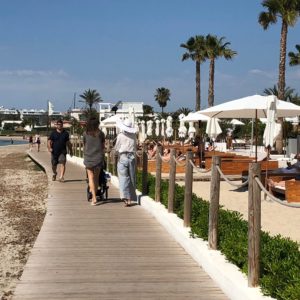 Beautiful people on the boardwalk

Perhaps I am biased but I love Nobu Ibiza Bay’s location.  It its right in the middle of a boardwalk that skims the coast so you can walk for half an hour in either direction.  Along the way you see the whole gamut of boardwalk life, from fit-freak runners to parents bumping babies in Bugaboos. You would hardly know a whole nightlife exists elsewhere on the island, or on neighbouring Formentera, which has just finished its jazz festival (I was reminded of the Balearics’ 24/7 existence when using the Pilates ball on the terrace outside Nobu Ibiza Bay’s upper floor gym and a taxi disgorged happy revellers, at 7.10 a.m.) 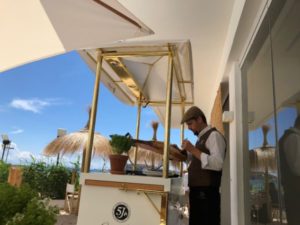 Where did the Balearic Beat, also known as Balearic House and Ibiza House, actually start? Ibiza attracted artists and bohemians from the 1950s but it was another 20 years before old farm buildings on the island were being converted to clubs popularised by such names as DJ Alfredo and Chris Rea and, later, Trevor Fung, Paul Oakenfield and Danny Rampling. Today luxury hotels and villas have sprung up to accommodate visitors to Ibiza who want at least to have a taste of the best, but, just as Las Vegas is not only gaming, so Ibiza is far more than a mishmash of hiphop, reggae and soul.  It is also tradition, as Bodega Cinco Jotas shows. Now, when in Andalusia on the Spanish mainland, you can visit the Jabugo storeroom and learn how to carve – but if you want to buy a souvenir, the least expensive price on the web right now is €196, per ham. NOW WALK THE WALK, THE BOARDWALK OUTSIDE NOBU IBIZA BAY