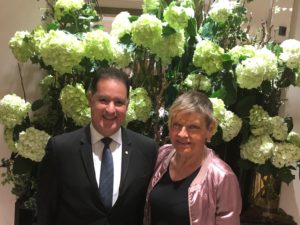 Unless you keep upgrading you have to spend more when you do re-invest, says London’s Colombian dynamo Alvaro Rey, GM of one of the UK capital’s best-located luxury hotels, InterContinental London Park Lane.  The gal has known this guy since he was miraculously putting InterContinental Buenos Aires, not exactly in the heart of that city, on the South American map, after which he transferred to InterContinental Sydney, where he did admittedly have one of the two best hotel sites in town (the view from the 11th floor rooftop Club InterContinental down to Circular Quay, the harbour, Sydney Harbour Bridge and the Opera House is unique). In London, the view from his seventh floor Club InterContinental is one of the best in the northern hemisphere, although competition comes from the seventh floor club at Waldorf Astoria Cavalieri, looking down at Rome and the Vatican. 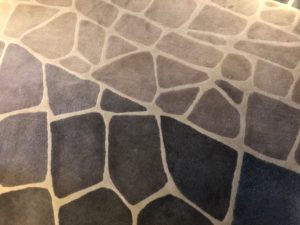 Following his maxim, Alvaro Rey is once again tweaking the club here in London, but he is also doing major work to bedrooms. The designer is RPW, whose London-based team is led by Elizabeth Lane, Heather McLellan, Ariane Stteinbeck and Jan Wilson. I stayed in suite 106, part of the enormous Capital Suite that he cleverly made out of what had been management offices. Yes, in the Good Old Days, when this 447-room hotel opened in 1975, the GM and his disciples would have had, and did have, splendid offices looking straight out at Apsley House, Hyde Park Corner and its Quadriga.  Now the team has even more splendid offices, custom-built in part of the carpark, and the hotel has a Capital Suite with two meeting rooms and up to five bedrooms.  I was in one. One of the first noticeable features is its carpet. 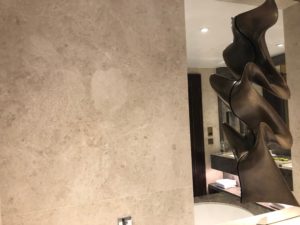 Clever bathroom decration – a sculpture on the mirror

Best described as a light tortoise ‘shell’ design with off-white dividers, the pale mushroom main colour brilliantly evolves to blue as you walk closer to the bathroom. And do look at the bathroom: it is crisp and business like, which is highly suitable for a hotel that is, apart from the traditional summer vacation months, essentially top-business.  (It is also Top Bods – as I was checking out, a royal family was about to check-in: I never found out which, though I do know there was also a household name sports star inhouse who called the GM, while I was breakfasting with him at 7.30 a.m., to ask him personally to make sure that breakfast for one, poached eggs on wholewheat with side of avocado, was delivered to the appropriate room.) 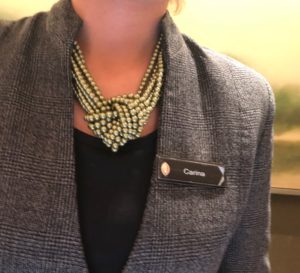 Yes, that is the kind of personal attention that GMs gave in the past and the very best luxury hotel GMs still give today.  Alvaro Rey has one of the most thoughtful Concierges in the business, by the name of Oscar Fernandez, from Spain, but it is still he, the GM, who sometimes takes and passes on room service orders.  And at the same time he must constantly be thinking about how to make his product even better, obviously for the hotel’s customers but also for his team.  At the risk of repeating a wish that hotels dressed their front desk women more attractively (I still yearn for the Yves Klein blue jackets women wore when the then-Hyatt on Collins opened in Melbourne), sometimes jewellery provides just the necessary lift. Look at the ‘uniform’ necklaces worn at InterContinental London Park Lane. NOW SEE MY SUITE