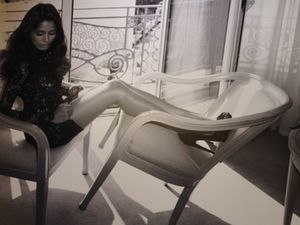 Freida Pinto on a wall in the bar-lounge

Mumbai-born Freida Pinto is just one of the stars who graces the walls of the ground floor lounge-bar of what is now, as of April 2013, Grand Hyatt Cannes – Le Martinez. This is the luxury hotel on Cannes’ La Croisette that has been associated with stars ever since it was opened by Emmanuel Martinez way back in 1929.  Its Art Deco exterior complements its salmon and grey interior (but the gal, like many others, is delighted that the current owners are going to give it a strong dose of botox to make it even more relevant for today’s celebs). Take Ms Pinto, who made her name with Slumdog Millionaire.  She has two new movies coming up, Desert Dancer and Knight of Cups, and she wants the best. 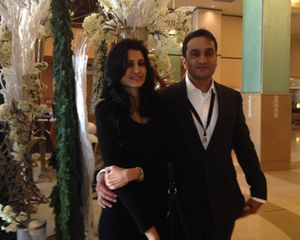 Arguably India’s most quality-concerned younger generation hotelier, Pramod Ranjan was in town during ILTM and of course his wife Monisha came to visit. What do the ‘other halves’ do during ILTM, I wonder? Some, like Anita Ohri, wife of the Lebua CEO Deepak Ohri, shop till they drop.  Annie Krooswijk joins her husband, Tom Krooswijk, for all meal breaks and social events (she is a creative force, young Annie – it was she who coined the name Bord’eau for Hotel De L’Europe’s fine dining restaurant, which gained its second Michelin star a couple of weeks ago). I suspect that Monisha Ramdan spends much of her ‘spouse time’ doing yoga. 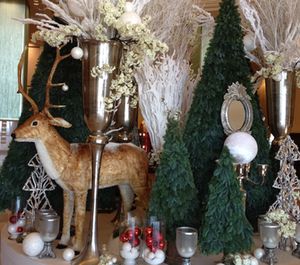 Christmas scene in the hotel lobby

The Martinez has long had a tradition that it hosts the official ILTM post-dinner cocktail, where Taittinger flows as if there were no tomorrow.  Goodness knows what time those jollifications finish but once they do, decorators move in and, by breakfast time, where a champagne pyramid stood last night, now there are Christmas decorations.  In the main, the fashion along the Riviera for Christmas 2013 is for all-white, or even colourless decorations, but here there are green trees.  At least it gives the concierge desk something to look at.  For those Martinez loyalists who might wonder, there are as yet few signs of Hyatt, other than a discreet sign outside the main door. 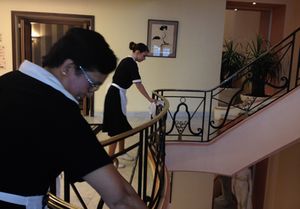 A team of maids working away

Really, the people who work in this 409-room hotel are amazing. The morning after the ILTM party here there seemed to be twice as many maids as usual, cleaning and dusting, dusting and cleaning. There is something about French maids, by the way – they are all so chic, with immaculate coiffures and make-up.  I remember James Smith, then GM of the much-missed Hong Kong Hilton, who always had a maid cleaning the escalator, quite unnecessarily of course, going up to the Grill, so popular with top business tycoons at lunch.  It is psychology, stupid (on a tangent once again, I am reading about the psychological nudge being promoted by the UK government – let people know that so-many-percent in the same tax bracket have paid their tax, and the response goes up). 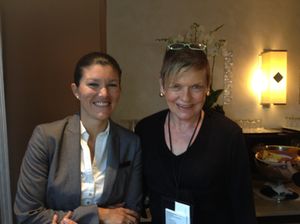 Yes, the Martinez team, which rises from 200 to double that number at such peak times as the Cannes Film Festival and, of course, ILTM, is amazing.  Everyone smiles.  I go into breakfast and Florence not only knows my favourite table but my favourite food, and the egg chef prepares your omelette and brings it to the table.  There is no problem with quality of product, either – the yoghurts are Ferme des Peupliers, for example.  If you a breakfast meeting person during ILTM, the Martinez is definitely the top venue: no wait, charming staff and plenty of space between tables.  If you are keen to practise your rugby scrum techniques, opt for the Majestic. 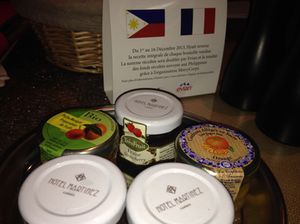 Publicity for the water-for-Philippes campaign

There is one special thing on the tables at the Martinez, by the way. Through December 16th, 2013, all Hyatt luxury hotels in France are partnering with Evian on a ‘support the Philippines’ initiative.  Michel Jauslin, whose son is half Filipino, spent many years in Manila and he loves the city, and the country. He has persuaded Evian that for each bottle of Evian bought in one of Hyatt France’s restaurants, Evian will send two bottles of water to the Philippines relief fund (is it true that some business people, to help the cause further, are ordering ten bottles at once?).