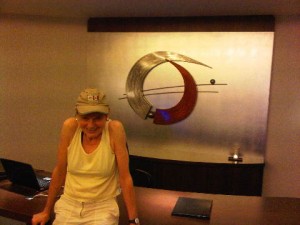 There is nothing that gives the gal more pleasure than being ahead of the game, like touring a future hotel in a hard hat or trying a spa before it opens.

This morning I had just such a treat, being invited to try the Park Hyatt Baku’s Armiati Spa, called for the Zoroastrian name for divine sparks.  The three-room spa – named for the relevant sparks, Purity, Renewal and Vitality, will open, apparently, in time for Eurovision.

Guests then will come in by themselves.  The guinea pig, also known as yours truly, was escorted in by a guard of honour of extremely well-groomed dark-suited guys, Azeris and an Indian.  Were they all going to come in with me too?

Oksana was waiting in one of the three cool treatment rooms. She washed my feet, and started the back massage as if tiptoeing on velvet.  She built up to such a crescendo it felt as if the entire national reggae band of Azerbaijan was drumming up and down my spine, unravelling the knots and kinks.

Oksana, it turned out, was trained at the sports academy. She honestly does one of the best therapeutic back massages anywhere (on another occasion, I shall try a treatment using the spa’s Bali products, from Indonesia, or June Jacobs, from New York).

The spa is part of the mammoth Oasis Club, the three-floor structure that is physically attached to Park Hyatt but reached via a small well-tended garden.  There is an Olympic-size indoor pool, with another, outside, for summer.

Add two squash courts and two tennis courts, one in a tent, and a kids’ games room, and a LifeFitness gym the size of Sports Club/LA facilities – as at Four Seasons Miami and San Francisco, and Ritz-Carltons Boston and Washington DC.  It is so large you can barely see from one end of the jogging machine army to the other.

The Club has 2,000 local members, of whom 400 use it daily. During my stay, the regulars early evening seemed to include the national weightlifting team of Azerbaijan, whereas the desultory attitude of their colleagues at 0635, opening time, indicated their wives thought they were working out though they seemed to prefer sitting on bits of equipment, sometimes but not always checking their Blackberrys. 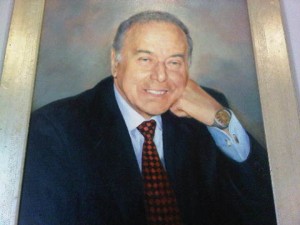 Hyatt’s fief in Baku, all five acres of it, is uniquely established.  The Hyatt Regency is the doyenne of luxury hotels in town – it opened in the 1960s as a lodging place for Soviet bigwigs from Moscow (it was then called Nakhchiva, after the region in the southwest of Azerbaijan that is today somewhat contentiously semi-autonomous).

The Republic of Azerbaijan got independence in 1991 but it was only in 1993, on the momentous date of October 3rd, that Heydar Aliyev, became President (he ruled until he died a decade later, December 12th, 2003 – he was succeeded by his son, the present President, Ilham Aliyev).

Heydar Aliyev is considered father of modern Azerbaijan.  The airport is named for him – as with all Marriott hotels, which have images of the Marriott family, you find a portrait of the smiling President in important Azeri places.  Enter the Nakchiva Hotel, which was bought by the Pritzkers with a local partner, whom they later bought out.

When the hotel reopened in 1995 as  the Hyatt Regency, it was the only decent place to stay in town, but it only had 182 rooms.  The Pritzkers had five acres of land so they added, in bits and pieces, an adjacent Park Hyatt (159 rooms), Tower One (37 one-to-three bedroom long-term apartments), eight duplex villas (seven of which are permanently let to BP, exclusive partner of the State Oil Company of Azerbaijan Republic SOCAR), another block with 25 apartments and masses of rented offices, and the already-mentioned three-floor Oasis Club.

Stay in either hotel, or in an apartment, and you can sign anywhere, anytime.   I was in 1809, the extremely comfortable signature suite of Park Hyatt Baku.  It is soft green and beige, has dining for six, a sauna and bathtub for two, and an enormous bed that was more than perfect for one. Equally important, it had instant email, and a big desk that faces east, out over the Oasis Club.

I could easily live here, as many do – the eighth villa ‘guest’ has not moved out since Park Hyatt Baku’s 2003 opening. Were I full-time, I would have early coffee and a glass of juice (really fresh, of course, still with bits of flesh in it) and a read of the International Herald Tribune in the seventh floor Club lounge followed by a proper breakfast in Mezzo (I would, of course, already have been to the Oasis Club, for a workout and swim).

I might lunch at the busy Gourmet Shop, off soup and baguette sandwich of the day.  Later, after it opens at 1700, there would be a beer or two at the Britannia Bar.  I might even try the Beluga Bar, a Wilson-design update of the 1960s classic bar, part of the original Nakchiva hotel.

GM Puneet Thandon stands by the sign for the original hotel, The Nakhchiva

But there are also ‘real restaurants’ to try.  In Mezzo, in Park Hyatt, I loved my Antipasto, with buffalo mozzarella, Parma ham, figs and focaccia – and a glass of the house red, a Tinto Cabernet Sauvignon-Shiraz 2009. In the marvellous Grill in the Hyatt Regency, I marvelled at the oh-so-21st-century décor.

Trisha Wilson and her associates have kept the 1960s columns, at least 20 feet high with classical tops, and hung gigantic black chandeliers from the ceiling. The long wall has four abstract oils, each at least eight feet high.  The best way of describing the unique shapes are Giacometti figures next to a pint-sized swimming pool.

Hyatt is renowned for its fabulous foods.  In the USA it was Frank Ansel who truly understood what regular travellers wanted, whether in hotels or not. In Asia it is still Andreas Stalder, whose magic touch is behind such eternal restaurants as Mezze9 in Grand Hyatt Singapore and, a couple of years its junior, Made In China in Grand Hyatt Beijing.

Here it was not only Mezzo’s all-purpose menus but The Grill’s back to basics.  Choose your beef, from Australia, Canada or USA. Choose your cut, and your intensity of cooking. Already, having left an hour ago, I think back to Hyatt Baku’s addictive home-made yoghurt (which came around from here, centuries back, says My Man, although some research says it was originally Persian, and Abraham owed both fecundity and longevity to its regular ingestion.