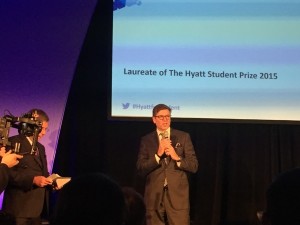 Finally, before leaving Cannes, the gal had the great honour of being invited into the inner sanctum of the Hyatt family for the eighth annual prize-giving of Hyatt Student Prize. This was started by Area Director Michel Jauslin, and now 35 hotel schools are invited to enter their best student. Eight finalists, chosen by two-minute videos and written submissions, were flown, courtesy Air France, for the final assessment. The jury, here at Hyatt‘s luxury Cannes hotel, Grand Hyatt Martinez, said that words that came up constantly were passion, curiosity, humility. Hyatt‘s head of worldwide operations Chuck Floyd flew in to award top prize to Rubina Insam, an elegant German lady from EHL Lausanne: runners-up included the equally-impressive Conrad Sokolnicki from Dubai‘s Jumeirah-affiliated Emirates Academy of Hospitality Management EAHM. And then Billecart-Salmon and Nespresso, courtesy two other sponsors, flowed, together with lots of Evian and superb pastas cooked here in the ballroom. 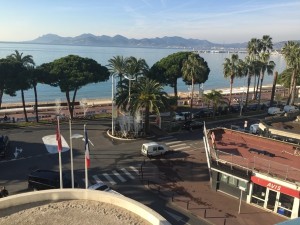 View down from suite 320

My last morning, I looked down from gorgeous suite 320 to the Croisette outside. This really is a magical view, which you can also get, as you travel west, from the Carlton InterContinental, J.W. Marriott and Majestic Barrière. Sadly the programme during ILTM is so tight that there is little time to enjoy your bedroom, regardless of its size and in which hotel you happen to be. Pop-up hotels would do extremely well here during Cannes’ major events, ILTM and also the annual Film Festival and various trade shows – Hubert Viriot, CEO of Yotel, says his 600-room pod hotels, where you get about 75 sq ft of personal space, do very well at airports and major city centres but they are not pop-up, pop-down, and Cannes does not need any more hotel rooms outside of major happenings. 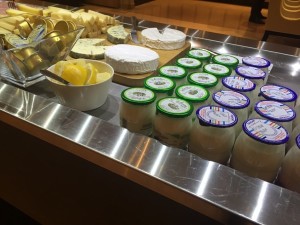 And so, packed and ready to leave, I head down 86 pink-carpeted stone steps from the third floor to one of the world’s best breakfast buffets. As is usual in France you shake hands with all the top personnel, and here in Le Relais they know me, and my favourite far-corner table – on my way, I say good morning to a Shanghai great, Pierre Barthès, who is always there before me, intently working his smartphone. The coffee is brought. The buffet‘s strawberries are enormous and flavour-intense, the prunes the same. I burn my wholewheat toast, my fault. I just manage to open the Danone yoghurt myself (I had a helper the first three days but he has flown off to another continent). The egg chef, her hair up under a crisply-starched toque, brings my omelette over, herself. 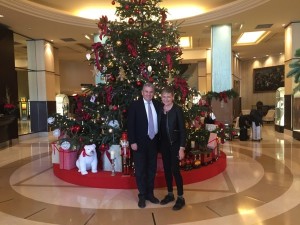 In breezes the boss of this luxury hotel, Claudio Ceccherelli. Soon he will know what the redesign of this Qatar-owned legend will look like and it is quite possible that by ILTM 2016 he will be operating with a vastly reduced number of bedrooms (sadly, I might have to be stoical and move elsewhere). But Claudio Ceccherelli smiles, as always. I think he was born as a smile with a body, and a big heart and lots of brain, of course. I collect my Porsche Rimowa wheelie, which looks lilliputian compared with everyone else’s maxi-suitcases to carry everything they have in their closets and more. Would I prefer the helicopter to a van, asks the ILTM travel lady? Of course. I head off to Heli-Monaco – to Monaco.