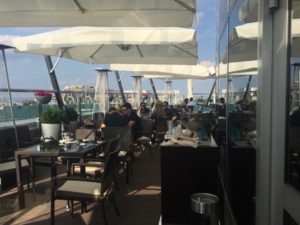 The gal’s final stay back in Kiev was at Ukraine’s supreme luxury hotel, Hyatt Regency Kiev (this is where top internationalists stay for security, says long-time GM Gordon Campbell – it is the only hotel that has a big forecourt that can be sealed off to repel paparazzi or other intruders). No names mentioned but this where the biggies stay. This is where weekend sun-worshippers come, too, to sit under one of the nine umbrellas outside the 8th Floor Bar – left – which serves two hours’ unlimited prosecco Fridays, Saturdays and Sundays, daytime only. It is a stunning building, a ten-floor mirrored sculpture – see above – that looks only ten days, rather than ten years, young: the hotel actually opened late August 2007. It had been planned first as an InterCon, then as a Sheraton, but finally, after the long delay that seems the norm here in Kiev, it opened as Hyatt Regency, and thus it remains. 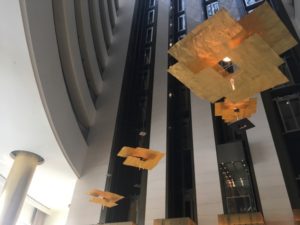 Looking up the lobby atrium

The spacious lobby soars up through the ten-floor open atrium, its four elevator cabins surrounded, at ground level, by 12 vertical rows of golden glass tiles each just over 14 inches up, and across. No-one seems to know why two such blocks are seven tiles wide, the others four, but then life is full of unanswered questions. What can be answered is why this 234-room hotel is consistently rated from number one to three in customer satisfaction for ALL Hyatt brands, ALL hotels worldwide. Wow. I ask Gordon Campbell why this is and he says he believes it has something to do with the fact that two-thirds of all his 198 staff are female. They are more empathetic and they want to please. 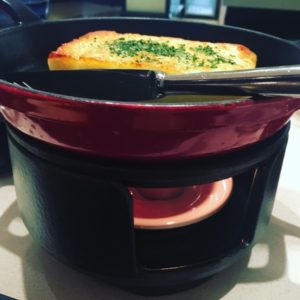 They are also thoughtful My room service dinner came up exactly on time with a bucket of ice, not asked for – she thought the bucket holding my wine bottle might need replenishing. HOW about that for thoughtfulness? Mind you Mr C is thoughtful too. Because of the collapse of Ukrane’s hryvnia by 75% – it is worth only 25% of what it was pre-the 2014 invasion – he has persuaded the hotel’s owners to pay all the staff an additional, 13th, month every year, and they got an extra bonus this June. No wonder they like working here. He looks after them. I am quite sure, too, that the food in their dining room is just as tasty as the dishes I experienced. Having had Ukrainian up to the hilt and tried excellent gravadlax in the hotel’s superb Hyatt Regency lounge, up 25 steps from that eighth floor bar-lounge, I then went Italian for dinner, caprese followed by pesto spaghetti with oodles of grated parmesan. 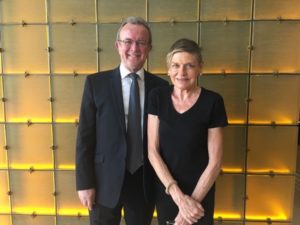 The gym, which is 24/7, has recently had new Technogym, the latest, and all the television screens work (what bliss!) and there are TRX ropes and lots of Pilates balls. There is a proper indoor pool. At breakfast I was intrigued to see, yet again, so many smoked and marinated fish and at least a dozen cheeses, including this cheese, on the right, heated over a burner. I can see why so many of the top corporate visitors to Kiev call this luxury hotel home. They can wander right into the kitchen, as at home, and in their rooms are Nespresso machines, Alessi irons, easy-see and easy-work safes, and big tubs with L’Occitane toiletries. Another big plus is that windows open – interestingly, only one window in the exterior ‘sculpture’ shot is open. I had mine open – if you want to see a typical suite, see the video below.