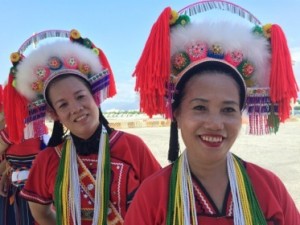 Overnight we leave Japan, with more than a tinge of sadness. Really the only way to see some of the country’s fascinating and unique islands is on a ship, either your own private yacht or a luxury hotel afloat of the calibre of Silver Discoverer. We wake up to find we are in Taiwan (one blessing is that now the ship’s satellite connectivity is on 24/7 – coping with Japanese government regulations that demand no WiFi on anything afloat, within a 12-miles radius of any land, has been a nightmare). We are in Hualien, and as we disembark for today’s eight-hour programme, we are greeted by a bevy of local ladies dressed in a style that is a reminder that their distant ancestors probably came here from Polynesia. 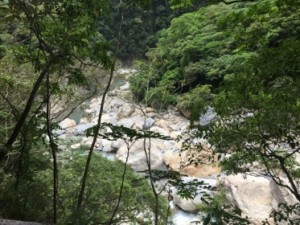 Looking down at marble rock

We are put in buses, the ones that look like double-deckers but in fact only the driver is down at street level. We head for Taroko National Park, an hour away from the port. We walk, along the frighteningly steep fierce rockfaces, soaring vertically to 3000 feet in some places. Boulders of marble are scattered in the river below. First, the Shakadang, or ‘mysterious valley’ trail, along a four-foot wide path about 80 feet above the river, the path hollowed out, as a rugged scoop, into those vertical cliffs. We are not alone. Busloads of Chinese tourists seem to be taking the walk, too – you know their origin as they shout, continually, and often right in your ear. Taiwanese, I am told, are more refined. 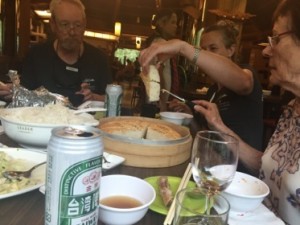 Lunch is at an aboriginal restaurant – they use that adjective for the various tribes descended from the Polynesian settlers all those years ago. The restaurant, Buluowan Leader Village, is up a steep zigzag road through dense forests. We emerge to see a lifesize stone sculpture of a dignitary with his head wrapped in a scarf (he is waiting to be officially unveiled). Inside the wood-cabin restaurant, at least 200 can be accommodated at long shared tables. Serving platters start with rice and pumpkin bits, help yourself from the communal platter… move on to soup with what seems like grass in it, and addictive eat-it-all baby prawns, deep-fried, and beef one way and pork another. The 11th course it, well, a round of bread, made with maize and poppy seeds – this is followed by watermelon. 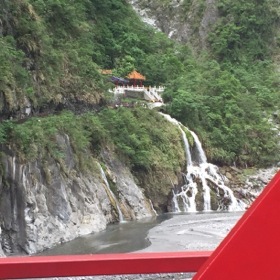 Looking across at Changehun Shrine

Afterwards, though I have eaten far too much, we do another hike, the Lushui Trail, part of the Old Cross- Hehuan Mountain Road. We stop at Changehun Shrine (Eternal Spring Shrine) to honour the 212 veterans who died while building the Central Cross-Island Highway 1956-1960, an idea of Chiang Ching-kuo, 1910-1988, son of Chiang Kai-shek and later his successor as president. The feat of constructing this highway, dynamiting rugged cliffs and tunnels and putting in countless bridges, is just staggering. After eight hours, and no rain, we make it back to our floating luxury hotel, for our last night afloat.