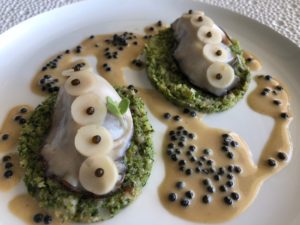 Bangkok had its first Michelin ratings December 2017 and the historic Normandie, atop the original wing of Mandarin Oriental, went straight in with two stars. Austrian F&B Thomas Kinsperger, who learned a lot of his finesse while working at another of the world’s great luxury hotels, Hotel Sacher in Vienna, says that covers instantly soared by 35% and have remained there ever since.  Certainly, when the gal popped in for lunch with him, and the Hotel Manager Franck Droin, every table was taken, mostly by chic young Bangkok fashionistas in latest styles.  Even at lunch many had at least a glass of Champagne or wine (tax in Thailand is a staggering 380%, and on beer, too). 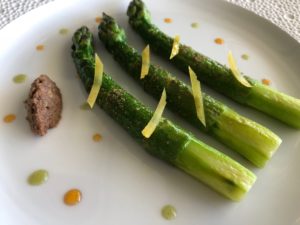 Chef Arnaud Dunand-Gauthier is from Normandy, which shows in his menu, specialising in most-perfect products – the butters, which include my beloved seaweed-studded – are Bordier. I had green asparagus, from farmer Sylvain Erhardt and here served with a divine sabayon.  I followed this with another starter, a couple of oysters from Normandy’s Utah Beach, near Pouppeville. Of course I later researched the name, and it was code for one of the five sectors of the Allied invasion during the Normandy Landings June 6th, 1944. 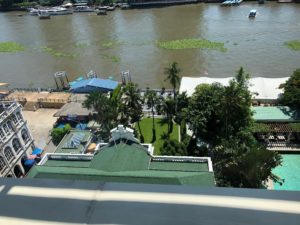 Looking down at the hotel’s landing stage

History is prevalent everywhere at this iconic 396-room hotel, which traces its roots to what is now the Authors’ Wing, built in 1876 (Normandie tops this block). From Normandie today I can look down, over the pool and manicured garden to the Chao Phraya River, at this time of year studded with the weeds that flow downstream every May through July.  Looking across the river, to the right is a soaring new block that will house 140 residences-for-sale, to be managed by Mandarin Oriental. Many of them are apparently already sold. 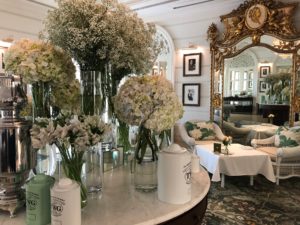 Down on the ground floor of the Authors’ Wing we walked past the Rimowa store and other boutiques to the main lobby, to admire ceiling-hung flower art that surprisingly lasts up to three months (showing it off in the photo above are Thomas Kinsperger, on the left, and Franck Droin). Then we walked through the elegant reception rooms of this block – its walls are hung with historic mirrors and memorabilia of Graham Greene and other notable writers associated with this luxury hotel over the years. We went on out to the landing stage, where a private boat was already waiting to take the Champagne-hued Rimowa wheelie and its owner over the water…