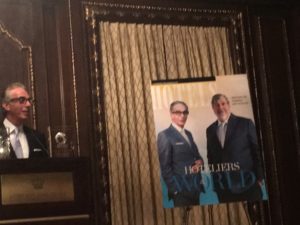 Hoteliers from many lands, and the gal, convened in New York on Monday, November 13th, 2017, for HOTELS Magazine’s annual Hoteliers of the World awards, in a gorgeous historic room at the luxury Lotte Palace New York hotel. Corporate hotelier was Minor Group Chairman Bill Heinecke, and independent hotelier of the year was Ed Mady, GM of The Dorchester Collection’s Beverly Hills Hotel and the Collection’s boss of The Americas – Mady, who coincidentally had been MD of this very hotel, movingly listed his own self-appointed personal advisory board, who all seemed to be with him Monday night. The board includes Ritz-Carlton founder Horst Schulze, and some of his Yankees baseball friends, the team’s one-time Captain, Derek Jeter, and two Hall of Famers, Tony La Russa and Joe Torre. 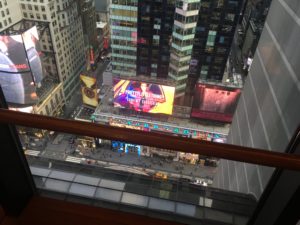 Looking down at Times Square

Lotte Palace New York GM Becky Hubbard hosted a really splendid cocktail and afterwards I walked back to Times Square to my home for the night, the Marriott Marquis. Outside of a gaming environment, say Las Vegas or Macau, I do not remember staying in such a large hotel – 1,966 rooms, and it works. It is the model of efficiency. The video below shows how bedrooms are simplified (to such a degree there are no labour-intensive minibars, although empty refrigerators will be added at the next refurbishment). I did have a coffee maker, easy-work, made specially for Marriott, like all the other fittings, it seemed, and the all-wall window gave a spectacular 33rd floor view down to Times Square. 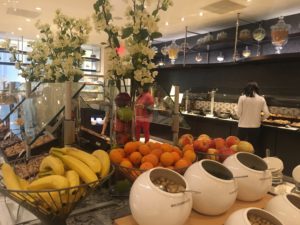 The open-atrium hotel, which was designed by John Portman in 1985, now has all those gaps above open-sided room corridors sensibly screened in, with attractive stainless screens that, says hotel GM Scott Nadeau, remind him of sheet music. There are no fewer than 14 elevators, programmed by Schindler to work as destination-dispatch, which is a technical term meaning you key in your required floor and the window above the keypad immediately tells you which elevator, A-N, to go to. Some of the elevators are glass-sided, which gives a good view down to the 23rd floor gym (24/7 LifeFitness), from where, in turn, you have an excellent view of Times Square, with its electronic advertisements that cost a minimum of $1.4 million a year. 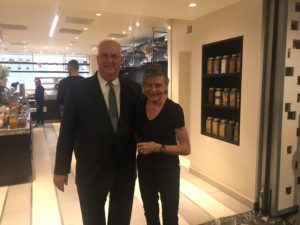 Another notable feature of this hotel is how they manage breakfast. Up to 650 guests will be breakfasting in the Concierge Club, open to all Marriott upper-tier loyalists, but I was meeting Scott Nadeau in the main restaurant, Crossroads, which typically does another 650 at breakfast.  Crossroads flows into the lobby on two sides as and when more tables are needed. I learned how the dedicated buffet room has food set out on a big peripheral C, with a central free-standing station. Most customers start at the right side of the C, so the most popular items are put there. Clever. This is all such an efficient operation, working with consultants to ensure that those staying here enjoy the luxury of knowing that this hotel will deliver. NOW SEE A VIDEO OF ROOM 3336