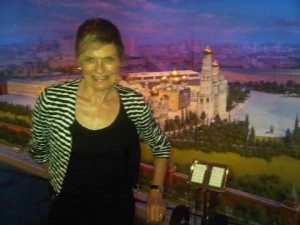 The diorama at Radisson Royal Moscow is fascinatingly 'real'

Yesterday it was a view of Moscow’s skyline.  Today, for the gal, it is a diorama, showing ‘Moscow, the capital of USSR’.  It was made in 1977 by Yefim Deshalyta and measures 50 feet across by 28 feet high with depth of 18 feet.  Lights twinkle on and off the entire time.  It is totally mesmerising..

Get past security at the entrance of Radisson Royal Moscow, enter the lobby and walk at least a hundred yards over champagne-coloured marble, polished to mirror intensity, and there is the diorama at the rear. 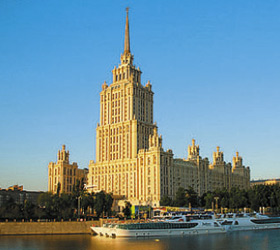 This is the hotel that has been called OTT – over the top – since it was built way back in the middle of the last century.  It was one of the Seven Sisters (Russians call them Vysotki or Stalinskie Vysotki), Stalinist wedding cake skyscrapers that were rushed up from 1947 to 1953 by the Architectural Studio of the Ministry of Construction in the USSR. Stalin used younger architects for these new-look buildings.

The two who worked on this were Arkady Mordvinov and Vyacheslav Oltarzhevsky, an expert on steel-framed highrises. 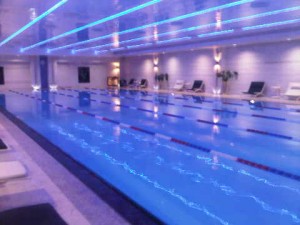 Dug under the hotel is a 50-metre, five-lane pool, with overhead neon lighting

The result was a 34-floor building that opened as the Hotel Ukraina, the tallest hotel in the world until the launch of Atlanta’s Peachtree Plaza in 1975.   It reopened April 28th, 2010 as the Radisson Royal Hotel Moscow, with 505 rooms and 38 letting apartments.

The owners miraculously dug out a basement pool, a staggering 51 yards long and five lanes wide (how did they do this since the building is on a low river bank, partly below the water level?). 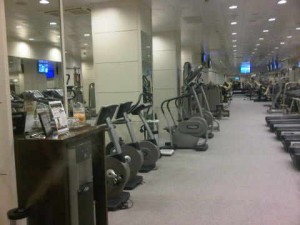 You also have a boxing ring, two dance floors and the largest gym in the world

Ismailov is owner of the totally OTT Mardan Palace in Antalya, where the opening party alone – with Mariah Carey, Paris Hilton, Tom Jones, Sharon Stone and anyone else who is anybody, and the acrobats from the opening of the Beijng Olympics – where that party, which went on for two days, is said to have cost $80 million.

The only President of a CIS nation who was not there was Putin, but then the then-mayor of Moscow, Yuri Luzhkov, was there, and they were not exactly friends.

The story goes that Putin was so angered by the money Ismailov spent overseas, in Antalya, Turkey, that he ‘wanted’ him to spend at least as much at home, here.  Hence not only the pool but its adjacent boxing ring and two dance floors and the world’s biggest Technogym, also all underground. 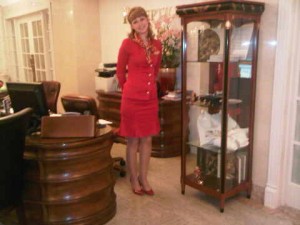 Is it true the owners vet all customer hostesses (who, clad in designer scarlet - the original ladies in red - all seem about six feet tall)?

This ultra-luxury hotel now has 505 rooms, with lots of apartments, some residential and some for letting.  There are 1,300 employees in all (must be dozens to clean the lobby, alone, and security comes by the hundred..).  The charming hostesses look as if they have been chosen from Miss Russia contestants.  Is it true they all have to be vetted by the owners (if so they have good taste)?

This is the hotel that offers the ultimate in good-taste shopping, Russian style.  Leading off the lobby are 25 sparkling shops, with names like Artioli (Italian men’s shoes), Cantamessa (Italian jewellery), Parmiigiani (watches) and Alexander Terekhov (haut couture). There is a massive Rolls Royce dealership. 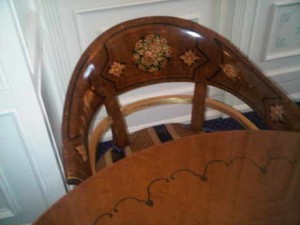 Detail of an exquisite lacquered chair, for everyday use in the club lounge

Yes, the hotel owners DO have good taste.  You expect it to be bling but it is not.  Because of its size it is not, amazingly, OTT.  You just say wow.  The Club Lounge on the 11th floor is open 24 hours.  It looks like a hunting lodge that has been attacked with a pot of real-gold paint and it has furniture that include immaculate lacquer chairs that should be in a museum, say the Hermitage.

At breakfast, waitresses in 1930s-style ‘tweenie’ caps serve the finest delicacies. Here, and around the hotel, there are in all over a thousand original Socialist Realism paintings and sculptures. There are hundreds of oriental scatter rugs, reputedly over $10,000 each. The Presidential Suite has a white grand piano and old-gold velvet dining chairs, and Cinderella-fairytale beds in both sleeping rooms. 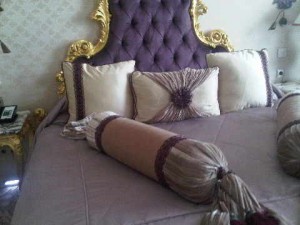 I stayed in 1061, a smallish – like about 350 sq ft – room, looking out across the Moskva river at the White House, seat of the Government of the Russian Federation and the mayor’s office.  There are five ice-breaking, year-round cruisers parked at the hotel’s yacht marina – the boats are part of the hotel, and will be doubled in number in a couple of years.  Let me look around the room.

It has thickest cream silk drapes and ties that would do justice to the Met back in New York.  The Mühldorfer bed has a fluted painted-wood headboard, the furniture is all hand-painted blue and white wood.  The bathoom – marbled of course – has an electric rail and heated floor, and Etro tooth mug and tissue cover and so on that cost at least $150 a piece.

The Frette bathrobes and rolled-edge Frette towels are quite unlike any I have seen anywhere else.  This place oozes money.  But you know, it makes one smile.  It has been put together not only with cash but passion, and thank goodness the owners are also passionate about FOOD. Wait for tomorrow….