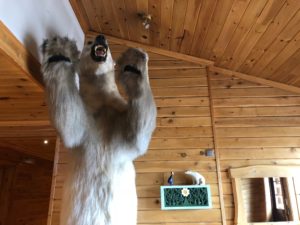 To share a bedroom with a pair of penguins may be, well, unique, says the gal – but then Hotel Rangá, Iceland, is a one-off in so many ways (walk into the intimate reception and you are greeted by a polar bear which, unlike the penguins, is real).  This is unforgettable luxury, a 52-room Small Luxury Hotel of the World that is owned and run with passion, nonstop.  On this visit the entire experience had started when disembarking the warm sanctuary of Seven Seas Navigator: officers were there to see passengers off, there was lots of hugging and many, passengers at least, were near to tears. 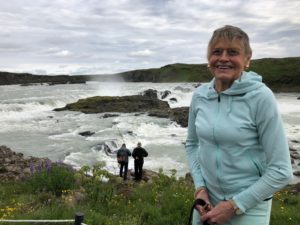 A stop at Urrioafossfalls, enroute

But standing at the bottom of the gangplank was someone who quickly became a new friend, driver Jón Sigurdor Halldorsson.  It would take about 90 minutes to get to Hotel Rangá, inland east from Reykjavik, in a lonely part of Suderland between Hella and Hvolsvöllur, but en route he proposed to show us things off the main road. The first stop was at Urrioafossfalls, on the Pjorsa river, fed from Tungnafelsjökull glacier.  Then it was back to Highway One, a perfect two-lane road, with four-foot yellow markers at regular intervals to help drivers in blizzards (no problem with snow, says Jón, the ploughs are out quickly).  His Mercedes has, by law, to wear snow tyres from November through to mid-April.  Like most Icelanders, Jón reveals he has changed his lifestyle – after decades of starting companies, he now seems not only well suited, but really happy with the life of driver-guide. 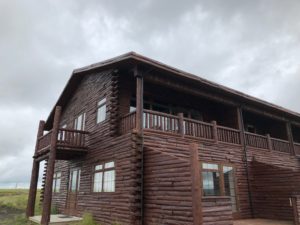 My room, at the end, upstairs

I do get the feeling he hopes his 19-year old son will also change direction, away from his dreams of becoming a tattoo artist. We turn off lonely Highway One, through  the cowboy ranch-like outline of a gate being carefully painted, by an octogenarian. The considerably younger – well, only by a few years, biologically – owner of Hotel Rangá, Friôrik Pálsson is, in a boiler suit, supervising. After a 1,000-yard drive along tarmac, single lane, with moss-covered lava either side as far as the eye can see, we get to the wood-frame hotel, sprawling timber-beam walls with green eaved roof, one end rising to double-height, namely two floors.   My room, Antarctica, is at the end of the upper level. 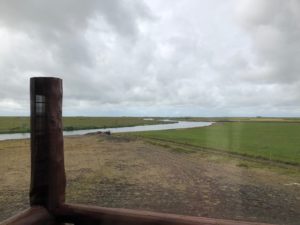 .. and the view from the room

When Friôrik Pálsson retired from running a massive company selling brandade, dried cod, worldwide, he spoke to a friend who, like him, had a horse farm. The friend’s farm had lodging, with 21 bedrooms.  Would Friôrik Pálsson like to buy it? After a conversation, it seemed, he was handed the key. Now, 15 years later, he has an unforgettable 52-room hotel, with several themed rooms. Room #60, Antarctica, is certainly my favourite, for its marvellous views, down to the River Rangá (‘twisting’) that gives the hotel its name, and, within, its thoughtfulness, with an Italian statement bathtub in the main room complemented by a bathroom-in-a-box that has heated floors and wall-set electric rails, and Eco toiletries.  I must also mention a standing cheval mirror, in the main room, that adds ten inches to your height and takes at least ten pounds off your weight. Or seems to… NOW TAKE A TOUR OF ROOM #60