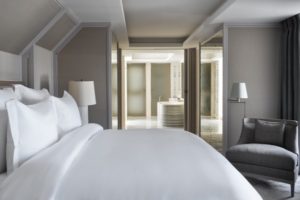 After over four years’ work, Hôtel de Crillon, A Rosewood Hotel, opened its doors on Wednesday July 5th, 2018 – and among those ready to welcome guests were Rosewood’s CEO Sonia Cheng, President Radha Arora, and GM Marc Raffray.  The 124-room beauty has been redone by architect Richard Martinet and by a veritable palette of designers that includes Aline d’Amman, Tristan Auer, Karl Lagerfeld, Chahan Minassian and Cyril Vergniol. The building was originally constructed in 1758 for Louis XV and it later passed to the Crillon and on to the Taittinger families.  On the political side, after having house the Allies during WWI, the League of Nations was formulated here in 1919 – during WWII it accommodated the commanders of the French and UK forces. On the culinary side, expect marvels from Christopher Hache, who has spent part of the closure working with Thomas Keller: on the fitness front, expect a serious gym since the GM is a boxing enthusiast.  This is a luxury hotel that will have everyone talking.