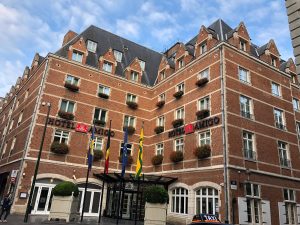 Hotel Amigo, Brussels, Sir Rocco Forte’s base in the capital of Europe, was once a prison and, says the hotel’s Danish GM, Jan Nielsen (above), the prisoners used to brew their own beer – he actually came in to the hotel on a Sunday to tell someone this. Now perhaps fortuitously this man, who originally wanted to be an opera singer, in fact diverted, to become an Economics grad. On the basis that it makes business sense to do the same today, a local craft brewery uses that old-old recipe to brew Beer-A, only available in the 173-room luxury hotel. Conveniently only one block from Grand Place, this is, says the gal, an absolute benchmark for a top luxury hotel. 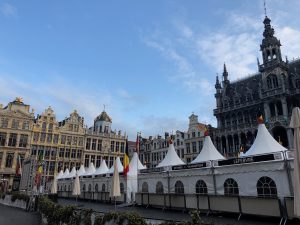 The five concierges share experiential ideas in a clever Concierge Timesbrochure. Some visitors might like to visit the EU Parliament, which at least is free but I would want to be paid to go. Much more enticing is the current beer event in Grand Place or the summer-long 10th Brussels Comic Strip Festival. In honour of this the hotel’s lobby has been transformed into comic book heaven – see a video below.  Jan Nielsen partners, by the way, with the estate of Belgian cartoonist Georges Remi, better known as Hergé, 1907-1983. Two bedrooms and one suite, #421, are themed for his creation, Tintin. 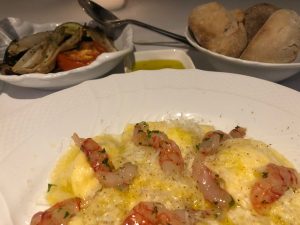 As one of the videos below shows, this suite is just gorgeous. Pair whimsical cartoons and little sculptures with leather-lined drawers, personal weights, Forte Organics and Harmon/Kardon Bluetooth and you get the picture. Add in an absolutely first-class Italian restaurant and the entire Italian-ness of this Italian-DNA hotel company becomes even more apparent. Sir Rocco and his family work, cleverly, with Fulvio Pierangelini as culinary consultant for all except, for some reason, the company’s pair of UK hotels, and frankly I just love Fulvio Food. From a 180-degree window-set booth you look across the width of the interior part of the restaurant, over a divider to a far-away wall mirror that reflects how all diners seated over there seem to love their food, too. 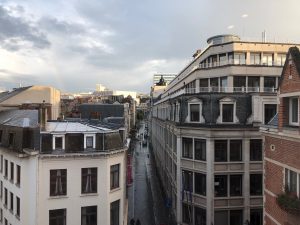 So, dinner. Bites of focaccia with olive oil and baby tomatoes.  Served on Richard Ginori china, tuna tartare in chunks with big bits of avocado and creamy stracciatella, from the inside of burrata. Boira IGT 2017 Cantine Volpi San Giovese and, a Roman specialty said the shaven-head Rome waiter, ravioli cacio e pepe with red prawns tartare. Food for the gods… (and the breakfast includes Italian bruschetta as well as Brussels’ delights of the calibre of chocolate lumps and waffles). Come back at Christmas, by the way, and this truly memorable luxury hotel will be themed for the 1961 movie Breakfast at Tiffany’s. Its star, Audrey Hepburn, was born in Belgium in 1929, though why is not immediately apparent as her mother was a Dutch baroness and her father was Bohemian. There is, by the way one element that binds all this hotel’s high points together and that is service. There is no one star, everyone stands out, from the Mancunian housekeeper to the Syrian driver, both here 15 years, and, of course that Roman waiter. NOW SEE THE LOBBY WITH ITS DISPLAY OF KIDS’ BOOKS – AND THEN TOUR THE TINTIN SUITE