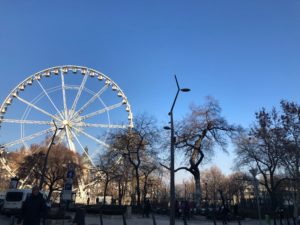 Hosting the first non-American hotel investment conference of the year is a responsibility for so many – for the organisers, the host hotel and panellists and delegates who might well have to brave unfriendly weather. But in the case of Budapest’s annual Hotel Investment Platform CEE & Caucasus, HOTCO, everything this year went according to plan.  The Hungarian capital, says the gal, was at its marvellous best, as shown by the view across the Chain Bridge, above, and also the big wheel, just next to the host hotel, Kempinski Hotel Corvinus, Budapest. 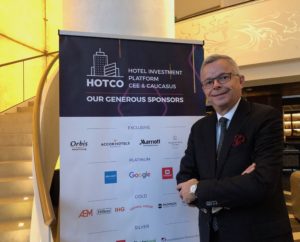 Organised as always by the event’s co-founders, Marius Gomola, MD Horwath HTL Hungary, and HOTCO director Liliane Otsuka, this year there were 350 delegates from 34 countries (including for the first time Japan and Taiwan). Once again, there was a sizeable delegation from Israel. Hotel GM Stephan Interthal beamed throughout the event – apart from anything else, HOTCO is an opportunity to showcase the hotel, and its brand, to competition. Throughout the year the hotel attracts many groups, including a growing business in big-number Indian weddings, but this is one of the most important, and in addition to the event itself he picked up over 50 inhouse guests. 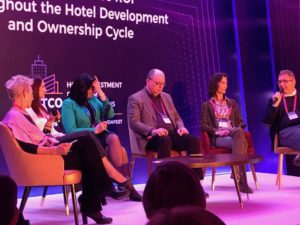 The HOTCO region, covering Central and Eastern Europe plus the Caucasus, has seen eight percent of all hotel transactions in Europe in the last ten years.  Projected national growth rates through 2024 are led by Romania, at 3.5%, Hungary, at 3.3%, and, one percent behind, Poland. Rolf Schmidt, Founder and GM of TOPHOTEL-PROJECTS, is optimistic for the area, which currently has 242 pipeline projects (49,583 rooms): of these, 53 projects are in Poland, 25 in Croatia and 16 in Georgia, and, overall, 98 are five-star, and 144 are upscale. No figures were given, but there was a lot of interest in the growth of the hostel sector. Such companies as A&O Hotels and Hostels, and Meininger Hotels, both charge by the bed, be it in a room for two, four, six or eight: similarly, Rupert Simoner, CEO Vienna International, introduced his REVO concept, offering hostel, standard hotel and longer-stay alternatives. 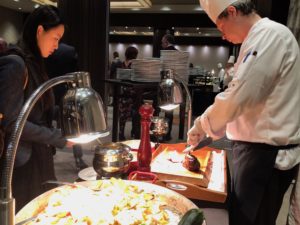 But the main memory of this friendly, and thoroughly worthwhile, investment conference was that the program, all in plenary, was logically planned, from overview via financing and design and labor through to the future. There was also plenty of networking. Add, too, superb refreshments. Kempinski Hotel Corvinus was the setting both for a tasting of Hungarian wines and a professional fashion show highlghting the first evening’s cocktail, and a buffet lunch on day two featuring several carvery stations and plentiful plates of goose-liver foie gras, gravadlax and fresh salmon.  Yes, going to this conference was an excellent investment for everyone to whom I spoke. WHAT OTHER INVESTMENT CONFERENCES OFFER A FASHION SHOW LIKE THIS?