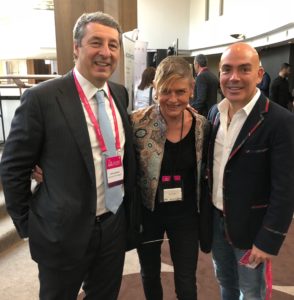 There was a lot to learn at HOTCO 2018 about millennials, and blockchain, and online travel agents and such giants as Google – see videos, below. One of the most riveting panel discussions could virtually have been called When Harry met Sally although it was, in reality, when Rupert (Simoner, Vienna House) met Kike (Sarasola, Room-Mate Hotels). They had honestly never set eyes on each other before but their HOTCO panel had the gal, all the luxury hoteliers and investors and others fascinated. Both are leading companies that plan on integrating such elements as hostel accommodation and on-site working – Room-Mate Hotels already has its own Be-Mate subsidiary, offering outside apartments and houses that come with full hotel facilities. The ever-creative Sarasola has also trademarked the name Happitality worldwide (hospitality, to him, is dead) – SEE VIDEO OF BOTH RUPERT SIMONER AND KIKE SARASOLA, BELOW. 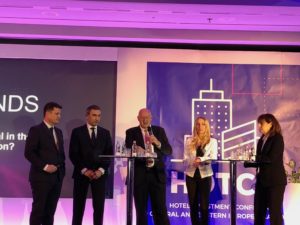 Ah, brands, Long-time Hilton Jean Paul Herzog masterfully controlled Deutsche Hospitality, Hilton, Marriott and Wyndham in discussing how many brands the market needs (interestingly Marriott pulled out of Tirana this January, though Silvija Lovreta says that they would like the former-Sheraton, currently operating as MAK Tirana, back – conveniently, Hilton opens a Garden Inn in the city this September, says Marybelle Arnett). In all, Hilton opened 17 properties in Central and Eastern Europe, CEE, in 2017. Hyatt’s was quick to point out that Hyatt, however, has often been first – in Armenia, the company might be helped by its CEO Mark Hoplamazian’s heritage, and though his colleague Takuya Aoyama is not surprised that the Hyatt Place Yerevan was an immediate success he is delighted that a Jermuk spa hotel is doing well. 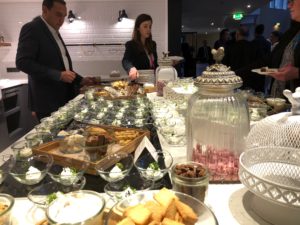 Yet another breakout spread, at teatime

Azerbaijan is fragile, said some, though UAE tourism boosted it after the Azeri currency plumetted. Georgia got a lot of comment – it is associated with the good life and easy living, said Accor’s Alexis Delaroff (he expects Tbilisi to acquire some projects that could have gone to St Petersburg). Infrastructure is, however, needed in so many destinations. Airports need updating, road and rail transport requires an overall, and at least it is probably appreciated that the Chinese, who have a special relationship with Hungary, are seemingly taking responsibility for the Belgrade-Budapest rail link. Budapest, however, may have big advantages in its stunning buildings, the Danube and its busy summer-long river cruising, but somehow its long-talked about convention centre must become reality. 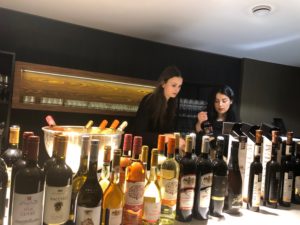 As always at any investment conference it became clear that financing is the key to reality. It was refreshing to hear former English lawyer Peter Grundberg talk, and so eloquently, about how he and his long-time friend and business partner Will Clothier used membership-based crowdfunding to finance their Brody House art hotel in Budapest, named for Hungarian writer Sandor Brody. Talking of eloquence, no-one emcees better than Horwath’s own Global Business Director James Chappell and here, in the ballroom of the luxury Kempinski Hotel Corvinus, he was in sparkling form. The discussions and worthwhile networking, incidentally, extended far beyond the stated 5.35 p.m. closing on day two: Vintochina Co Ltd, top supplier of Hungarian wines to the Land of Xi, had kindly managed to divert a few bottles here, for an impromptu after-party. This is an investment conference not to be missed. NOW SEE VIDEOS FEATURING KIKE SARASOLA, AND RUPERT SIMONER